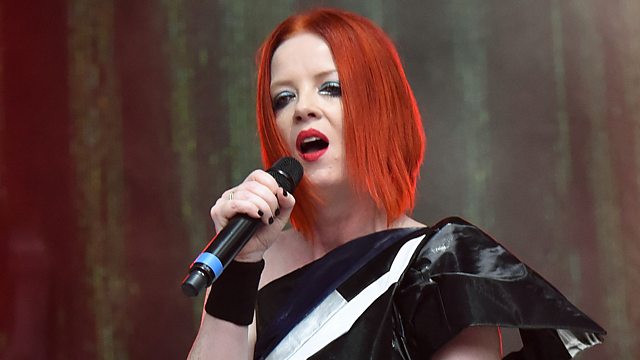 Shirley Manson from the band Garbage. We hear about Enid Bagnold, the woman who wrote National Velvet, plus how Scottish women on low incomes will get free sanitary products soon.

Shirley Manson from the band Garbage talks to us about women and power in the music industry, as she marks the 20th anniversary of their album Version 2.0. She discusses age, keeping a strong sense of self, being the only woman in the band, 'me too' in music and the need for more women, not just on stage, but behind the scenes too.

Scottish women from low-income households will be able to get free sanitary products very soon. This follows a successful pilot in Aberdeen. The Scottish government is giving half a million pounds to the charity FareShare to reach families who need this kind of help. Jenni hears from Gillian Kynoch who is Head of FareShare in Scotland and NI, and Monica Lennon who is a Labour MSP. She's putting forward a Members' Bill which will make sanitary products free for all women in Scotland.

Women in Saudi Arabia will be able to drive from next month, so how are things progressing? We speak to Amnesty International who are keeping watch as we get closer to the date.

Enid Bagnold is famous for writing National Velvet, which became a film with Liz Taylor. It's about a girl who pretends to be a boy because she's determined to ride in the Grand National. Enid was also a playwright and her most well regarded play is called The Chalk Garden which is currently on stage at the Chichester Festival Theatre. It stars Penelope Keith. Enid's been described as a rebel, a charismatic maverick and a daring pioneer who created strong roles for women but she's also been called a demon lady and a monster. Jenni talks to her biographer, Anne Sebba.

To find out more about the event, click here.