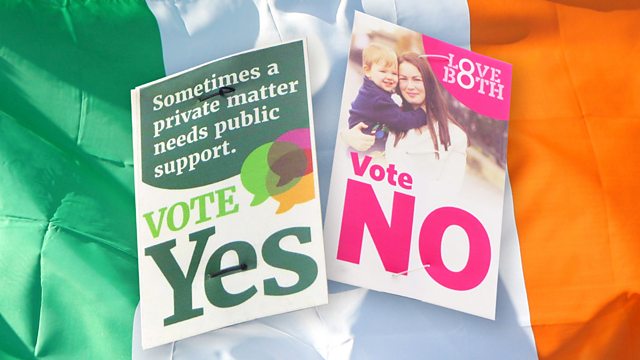 The YES vote to legalise abortion: what it now means in practice for women in Ireland, and for women in the North.

Following Ireland's Yes vote to legalise abortion, we discuss what this means for women now in practice and in Northern Ireland. More than two thirds of voters backed the decision to change the law; the only constituency that didn't was Donegal. We speak to an Irish politician, an obstetrician, a woman on the losing side, and a voice from Northern Ireland.

Plus Meg Wolitzer. The best selling author joins us to discuss her latest novel, The Female Persuasion, which has been described as a feminist blockbuster.

British composer Alexandra Harwood writes music for film and theatre and for the concert hall. She recently composed the score for new film The Guernsey Literary and Potato Peel Pie Society, and wrote a concert series for chamber music ensemble IMusicanti, inspired by Russian folklore and by her own heritage - as the fifth great granddaughter of Catherine the Great. She describes the difference in composing for film and concert, and how her Russian ancestry informed her new work.

And Yetnebersh Nigussie, the Ethiopian disability rights activist and lawyer. She lost her sight at the age of five and has recently won awards for her work promoting disability rights around the world: the Spirit of Helen Keller award - previously awarded to Hillary Clinton, Ban Ki-Moon, and Bill and Melinda Gates - and the Right Livelihood Prize, often referred to as the Alternative Nobel Prize. She talks about how her experiences inspired her and the importance of her prize-winning campaigning.