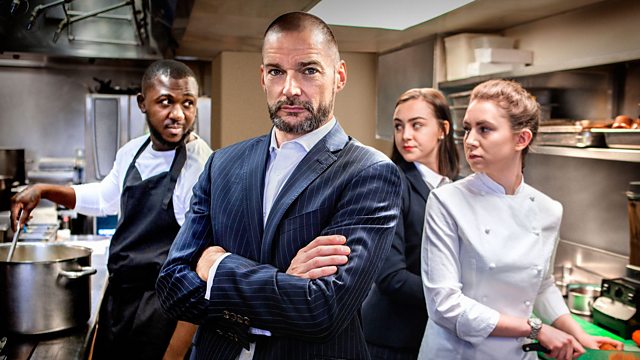 Fred Sirieix welcomes an all-British fine-dining concept, Epoch, and a Scottish street-food trader, ShrimpWreck, selling tempura prawn buns to Manchester. Epoch is seeking £600,000 to open its first restaurant in central London. ShrimpWreck is after £100,000 to open in Scotland.

Epoch is the brainchild of Emily and Ruth, a sommelier and chef, who both met whilst working at London's exclusive five-star Ritz Hotel, and have since given up their full-time jobs to pursue Epoch. They believe it could be a big hit in the UK's fine-dining market, worth £100million. At 22, Ruth is an award-winning chef, whilst Emily, 20, is the restaurant's youngest ever female sommelier. Their idea pairs British wines with the best seasonal produce, to offer a tasting menu with service to match. On the menu, dishes such as English truffle, Tiptop Farm potatoes, Godminster cheddar and honey cost £27 and are paired with a glass of English wine at £10.

Two investors are interested in Epoch. The first is Lydia Forte, of the five-star Rocco Forte Hotel group, with hotels in London, Edinburgh and across Europe. She is looking for new concepts to fit into her luxury hotels, and normally works with Michelin-starred chefs. She has openings in London, Edinburgh and Berlin. Also interested is Atul Kochar, chef and entrepreneur. Atul became the first Indian chef to be awarded a Michelin star in the UK, and owns Benares, a Michelin-starred Indian restaurant in Mayfair. In addition, he has a portfolio of seven other restaurants and six more on-board P&O cruisers. The total value of his group is £13m - £15m.

ShrimpWreck is an award-winning street-food stall from Scotland, started by 26-year-old Ewen Hutchison in 2016 with a loan from his parents. It specializes in king prawn tempura buns, fish finger sandwiches, salt and Cajun squid and sweet potato fries. In only 18 months it has been nominated for several street food awards, winning the 2017 People's Choice Award. Now Ewen wants ShrimpWreck to be the next big casual dining brand. Like Epoch, there are two investors interested in ShrimpWreck. One is David Page, chairman of restaurant investment vehicle Fulham Shore, and one of the UK's most successful investors - the man behind national brands including Pizza Express, Gourmet Burger Kitchen, The Real Greek and Franco Manca. David is always looking for simple ideas that can be rolled out into national brands. The other is Scott Collins, co-founder of hit burger and cocktail group MEATliquor, which has grown to a group of 13 restaurants, with sites in Brighton, across London and in Leeds.

ShrimpWreck already operates as a successful street-food business. Can Ewen convince the investors he is worth £100,000 to open his first restaurant? And will Emily and Ruth convince Atul or Lydia that Epoch, an idea on paper, is worth £600,000 to open in central London? Both have just three days to prove they are worth the money.

See all clips from Epoch and ShrimpWreck (4)