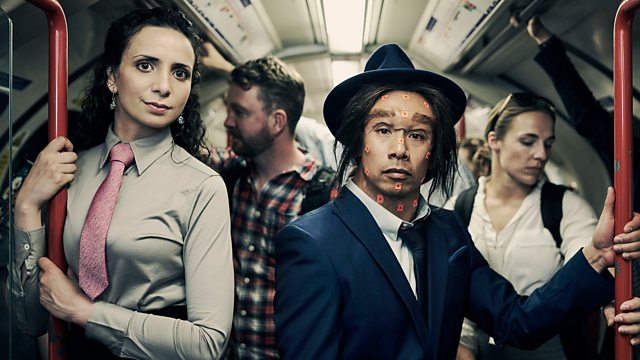 Ella Al-Shamahi and Andy Serkis investigate what Neanderthals looked like and how they lived in their Ice Age world.

According to recent science the Neanderthals are not the knuckle-dragging apemen of popular imagination. In fact they are our distant ancestors. About 2% of the DNA of most people is of Neanderthal origin - and it continues to affect us today.

This first programme in a two-part series investigates what Neanderthals looked like and and how they lived in their Ice Age world. It turns out that almost everything we thought we knew about them is wrong. They weren't hunched, grunting, knuckle-dragging ape-men at all. In reality they were faster, smarter, better looking - and much more like us than we ever thought. Our guide is Ella Al-Shamahi, a young, British, rising star in Neanderthal research, with an unusual sideline as a stand-up comic. She enlists the skills of special effects company Jellyfish and Andy Serkis, best known as Gollum in the Lord of the Rings and Caesar in Planet of the Apes, to create the first ever scientifically accurate, 3D, working avatar of a real Neanderthal. In Andy Serkis's studio, Ella brings together a core group of experts from all over the world - our Key Investigating Scientists - who are at the cutting edge of Neanderthal research.

Ella also gathers evidence by pursuing leads across the globe, meeting leading experts in their labs and at significant sites of Neanderthal discovery, from Iraqi Kurdistan to Gibraltar. She begins with a fossil Neanderthal skull found in Shanidar Cave in Iraq that she calls Ned and takes it to a forensic expert who is able to reconstruct the face using clues from the bone structure, allowing us to admire the face of one of our ancient ancestors - one that hasn't been seen for more than 50,000 years.

Next, Ella enlists the help of her team to work out what Ned's body was like, building up layers from the fossil skeleton to create a digital Neanderthal. Then, using his motion-capture skills, Andy Serkis brings Ned back to life. Physically, he was smaller than modern humans, but much stronger and faster. With the help of our experts, we are able to reconstruct a Neanderthal hunt, showing how they used their immense strength and speed to ambush and bring down vast animals like woolly mammoths. These were people supremely adapted to their environment. But there was more to Neanderthals than their physiques. New archaeological research is revealing intriguing details about the Neanderthal mind. In the sea caves of Gibraltar, we find evidence of Neanderthal art - and even their penchant for dressing up in vulture feathers. And in London, computer modelling of the Neanderthal vocal track can let us hear a Neanderthal voice 40,000 years after they became extinct. These were no brutish apemen - they were surprisingly like us. So finally, to see just how well Neanderthals would blend in to modern society, we put Ned amongst the commuters on a busy tube train. He fits right in.

See all episodes from Neanderthals - Meet Your Ancestors