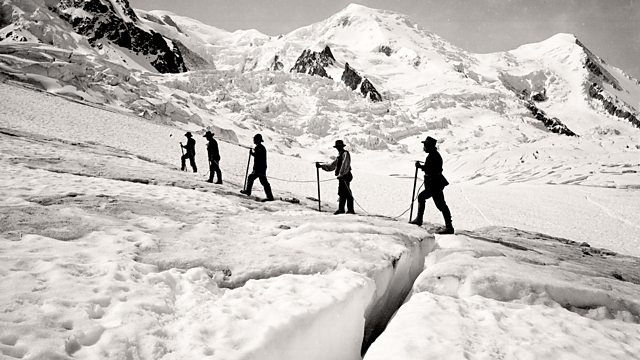 How to see a landscape through the eyes of visual artist Tacita Dean plus what photography did for the mountaineer and what the mountain did for a physicist.

Tacita Dean has travelled the world pursuing her interest in landscape phenomena, capturing them on film and then editing that material to produce her art. In a new exhibition at London's Royal Academy she presents works new and old on everything from cloudscapes to the cosmos.
Dean who trained as a painter talks to Eleanor Rosamund Barraclough about the importance of courting the unknown and the mercurial qualities of film image, flares, flaws and all.
Then focus on mountains and those who climb them. New Generation Thinker Ben Anderson reflects on an interplay between climbing and photography and how posing led to new understandings of what happens to the human body as it switches between stillness and movement plus the role mountains played in the intellectual development of the 19th century physicist and poet, John Tyndall with Tyndall's biographer, Roland Jackson and literary scholar Gregory Tate.

Roland Jackson, Visiting Fellow at the Royal Institution THE ASCENT OF JOHN TYNDALL: Victorian Scientist, Mountaineer and Public Intellectual is out now.
Dr Greg Tate lectures in Victorian Literature at the University of St Andrews and was chosen as a New Generation Thinker in 2013.

Dr Ben Anderson is a 2018 New Generation Thinker from Keele University who is writing a book Modern Natures: Mountain Leisure and Urban Culture in England and Germany, c. 1885-1918.
New Generation Thinkers is a scheme run by BBC Radio 3 and the Arts and Humanities to select ten academics each year who can turn their research into radio.