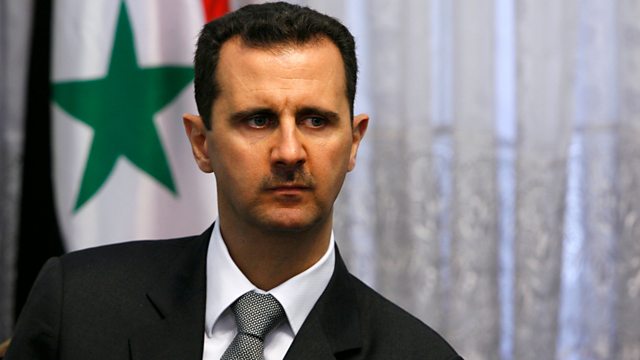 The story of the Syrian civil war. In this episode, Lyse Doucet tracks the first months of the uprising through to the chemical attack in Ghouta.

In this two-part series, Lyse Doucet tells the story of one of the biggest humanitarian crises of our age, the Syrian civil war - seven years of brutal conflict, surpassing the length of World War II. Lyse, who has reported on the conflict from the start, explores how peaceful protest for change spiralled into unspeakable savagery - half a million people killed, millions of lives shattered and so much of Syria in utter ruins.

The series tells the inside story of the war from multiple perspectives. It hears accounts of the experiences of Syrian people from different sides - civilians and fighters who stayed loyal to the government of President Assad, as well as those who rebelled. To gain greater understanding of how this catastrophe unfolded, Lyse also speaks to leading politicians and soldiers from within Syria and also from western and regional powers, including John Kerry, David Petraeus, General Lord David Richards and William Hague.

In this first episode, Lyse tracks of the first months of the uprising through to the chemical attack in Ghouta that finally revealed the reluctance of the US to intervene in the war, despite the crossing of President Obama's 'red line' on chemical weapons. It starts by telling the story of two characters in Homs - one a protester, the other a government loyalist. Lyse shows how each viewed the protests from a different perspective. One saw them as a chance for democracy and freedom, the other saw them as violent and threatening. Within weeks the government had responded to the demonstrations with violence. The government claims this is because some protesters were armed - something that is denied. By speaking to politicians in the west and the Gulf, Lyse learns how those outside Syria watched with growing despair as protests slid into civil war.

She speaks to the officers who led the early advances of the Free Syrian Army, the Americans like David Petraeus who wanted to arm them, and Obama's advisors, who explain why the president was so reluctant to commit the US to direct intervention. The film tracks the growing extremism in the war, the arming of jihadists by Gulf states and the role of sectarian militias. In particular, Lyse returns to the site of a massacre in the village of Haswiya in 2013 that she covered during her reporting. Finally, she finds survivors willing to speak out about the Alawite militia, loyal to President Assad, that carried out the atrocity.

As Syria descends into chaos, she speaks to the key players who participated in the decision making over whether the US and others would attack Syria after the chemical attack on Ghouta. John Kerry, William Hague and Ali Al Jubeir (Saudi foreign minister) give the inside story on what really took place.

This two-hour series provides the most comprehensive account to date of how the tragedy of Syria unfolded. Importantly, it gets as close to a 360-degree account of some of the key moments in a war that by now has drawn in 75 countries and counting.

See all episodes from Syria: The World's War