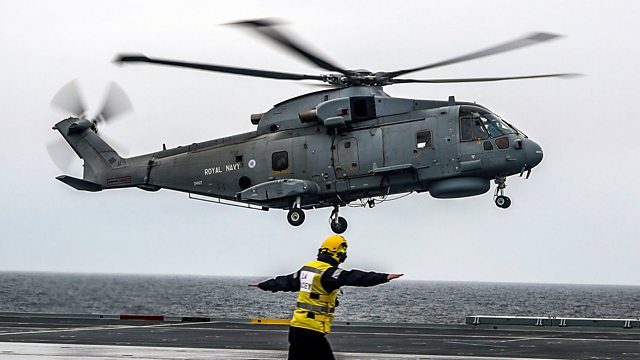 In at the Deep End

HMS Queen Elizabeth embarks on dangerous sea trials in the North Sea, testing everything from galleys to guns and power plants to propellers.

After eight years in build, HMS Queen Elizabeth embarks on dangerous sea trials in the North Sea. The 700 sailors on board have to test everything on the ship for the first time - from galleys to guns and from power plants to propellers. What is the supercarrier's top speed? How manoeuvrable is she and how stable in rough waters? Meanwhile, the ship's company start the process of becoming a sea-born community. On board is chef Mohamad Khan, who has to work out how to prepare pork dishes without offending his religion, able seaman Ricky Gleeson, who had 49 convictions before he was 21, and Dave Garraghty, the most senior non-commissioned officer on board, with a passion for car boot sales.

After four days at sea, the first aircraft lands on the flight deck and all seems well, but then there is an explosion in a cooling plant, a fuel leak that sprays everyone with diesel and the ship's rubbish disposal system goes wrong. There are also strange knocking sounds coming from underneath the ship.

Out with the Old, In with the New—Series 1

See all clips from In at the Deep End (2)