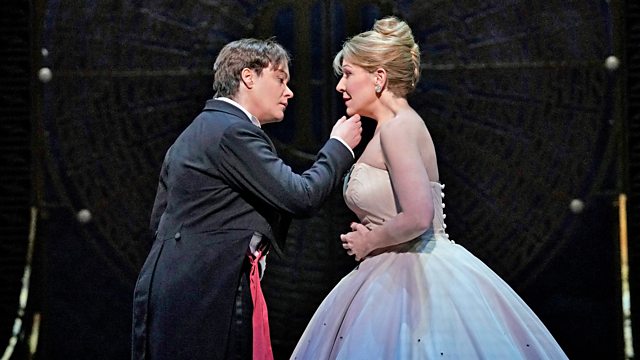 The New York Metropolitan Opera presents Massenet's take on the Cinderella story, with Joyce DiDonato as Cinderella, and Alice Coote as her Prince Charming.

The New York Metropolitan Opera presents Massenet's take on the Cinderella story. First performed at the Opera Comique in Paris in 1899, Massenet wrote his Wagner-influenced opera at the height of his fame, and it was an immediate success. In this production, as when it was first staged at the Royal Opera House, Joyce DiDonato sings Cendrillon, with Alice Coote as her Prince Charming.

A large room in the house of Madame de la Haltière with a chimney grate. Servants are busy preparing for the ball. Pandolfe, the second husband of Madame de la Haltière, wonders why he forsook the calm of his country home to marry a selfish countess with her two daughters, and pities the lot of his own loving daughter Lucette (Cendrillon). Madame de la Haltière and her daughters Noémie and Dorothée dress while the mother tells them how to attract the prince's attention at the ball. Late in leaving, Pandolfe resigns himself to accompanying them. Cendrillon enters, singing of how she wishes she could also have gone to the ball. After completing her chores she falls asleep by the warm chimney hearth. The Fairy Godmother and her attendants come in, transform Cendrillon into magnificent clothes for the ball, but warn the girl that their spell will only last until midnight, and that the glass slippers will protect her from being recognized by her family. Cendrillon promises to return at midnight, and sets off for the ball.

At the royal hall, all is excitement, except for the prince who is melancholy. The king reminds him that he must choose a wife. After five ballet entrées where the eligible princesses present themselves to the prince, a heavenly unknown beauty (Cendrillon) enters and enchants everyone—except for Madame de la Haltière and the two step-sisters. The prince and Cendrillon fall in love at first sight but when the clock strikes midnight Cendrillon runs off, as the stunned prince looks on.

Act 3
First tableau: The return from the ball

Cendrillon returns to the house, having lost one of her glass slippers in her flight, and relives the charm of the ball. Her fine gown has changed back into a plain dress. She hears the returning family carriage and hides in her room. Madame de la Haltière and her daughters insist that the prince rejected the unknown beauty. Cendrillon is on the point of fainting, when her father angrily sends the other women from the room. Tenderly he promises Cendrillon that they will return to his country home. When he has left, she recalls her mother’s death, and to prevent her father any more pain, Cendrillon flees into the night, to die on her own.

Under a magic oak tree in an enchanted forest, the prince and Cendrillon are drawn together by the fairies. An enchanted arbour of flowers blocks their view of each other but they recognize each other's voice and sing of their love. The prince offers his heart to see his beloved. The flowers disappear and the lovers, surrounded by the spirits, fall into a slumber in each other’s arms.

Back in Cendrillon's home, Pandolfe watches over his sleeping daughter, who was found months previously by a stream. Cendrillon awakes and her father relates how in her delirium she spoke to him about the prince, the oak and the slipper. Pandolfe convinces her that it was all a dream. Madame de la Haltière and her daughters appear with the news about an assembly of all eligible princesses at the King's palace. As a royal herald summons the princesses to go and try on the glass slipper, Cendrillon realizes that her dream was true. During the march of the princesses, the scene changes.

Second Tableau: A great hall in the palace

Back at the ballroom in the palace the prince recognizes Cendrillon among the princesses. The lovers are reunited and acclaimed by all present, even Madame de la Haltière. All turn to the audience and, out of character, sing that the piece is over and they have done their best to send the audience through "les beaux pays bleus (the beautiful blue countries)".