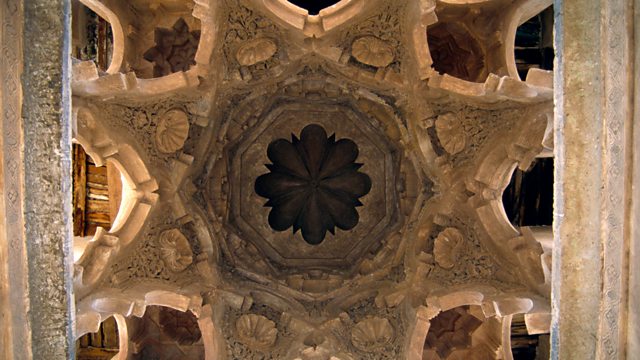 Melvyn Bragg and guests discuss the Berber people who dominated the western Maghreb and the south of the Iberian Peninsula from C11th, defending Al-Andalus from Christian attack.

Melvyn Bragg and guests discuss the Berber people who grew to dominate the western Maghreb, founded Marrakesh and took control of Al-Andalus. They were desert people, wearing veils over their faces to keep out the sand, and they wanted a simpler form of Islam. They called themselves the Murabitun, the people who gathered together to fight the holy war, and they were tough fighters; the Spanish knight El Cid fought them and lost, and the legend that built around him said the Almoravids were terrible and had to be resisted. They kept back the Christians of northern Spain, so helping extend Muslim rule in the Iberian Peninsula, before they themselves were destroyed and replaced by their rivals, the Almohads, from the Atlas Mountains.

The image above shows the interior of the cupola, Almoravid Koubba, Marrakesh (C11th)

Hugh Kennedy
Professor of Arabic at SOAS, University of London

Amira K Bennison at the University of Cambridge

Ronald Messier, The Almoravids and the Meanings of Jihad (Praeger, 2010)