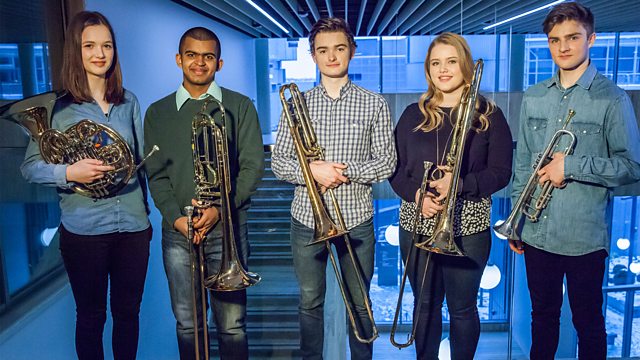 Coverage of the brass category final. Josie d'Arby is at the Royal Birmingham Conservatoire and is joined by euphonium soloist David Childs, a finalist in 2000.

With three places already decided in this year's semi-final, BBC Young Musician 2018 continues with coverage of the brass category final. Josie d'Arby is on hand at the Royal Birmingham Conservatoire and is joined by euphonium soloist David Childs, himself a finalist in the competition back in 2000.

This year's brass finalists are: 18-year-old trombonist Isobel Daws, who studies in Manchester; Will Thomas, who is 17, plays trumpet and flugelhorn and comes from London; 18-year-old bass trombonist Michaias Berlouis, a student at the Royal Academy of Music in London; Annemarie Federle, a French horn player from Cambridge who at 15 is the youngest player in tonight's competition; and Sam Dye, an 18-year-old trombonist studying in London.

The programme introduces us to the finalists, takes us behind the scenes and presents extended highlights of the performances. On the judging panel are two distinguished figures from the brass-playing community: Simon Cowen, principal trombonist with the Royal Liverpool Philharmonic Orchestra, and Simon Cox, trumpeter, arranger and publisher. They join composer, performer and writer Kerry Andrew.

BBC Young Musician has been showcasing the very best British classical music talent for the past 40 years. This is the fourth of five category finals showing weekly on BBC Four and the winners from strings, percussion, woodwind, brass and keyboard will take their place in the semi-final. There they will compete for the chance to perform in the grand final at Symphony Hall, Birmingham with the City of Birmingham Symphony Orchestra conducted by Mark Wigglesworth. One will be named BBC Young Musician 2018.