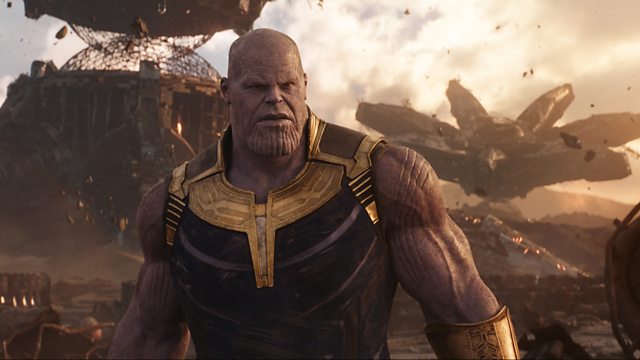 Avengers: Infinity War is released in cinemas today. Fans have been counting the days until the film's release, but what does this ambitious high-budget offering reveal about the state of the hugely successful Marvel Cinematic Universe? Mik Scarlet and Larushka Ivan-Zadeh consider the bigger picture.

At a time when many libraries across the UK are facing an uncertain future, Salley Vickers has gone back to the 1950s for her new novel The Librarian. Salley, and Peter Gaw who runs Nottinghamshire's libraries, consider how the role of the library has changed and adapted to a modern world, and the challenge they face today.

Two Welsh musicians - singer Kizzy Crawford and pianist and composer Gwilym Simcock - perform from their new album Cân Yr Adar, or Birdsong. They talk about their collaboration, which also involves Sinfonia Cymru, and how they were inspired by the landscape and wildlife of Carngafallt, the nature reserve in mid-Wales, known as the Celtic rainforest.

Plan B on his new album, Women in Chinese art, plus art reproduced on household items.

Avengers: Infinity War certificate 12A is in UK cinemas from 27 April 2018.

The Librarian by Salley Vickers is out now in hardback and as an eBook.