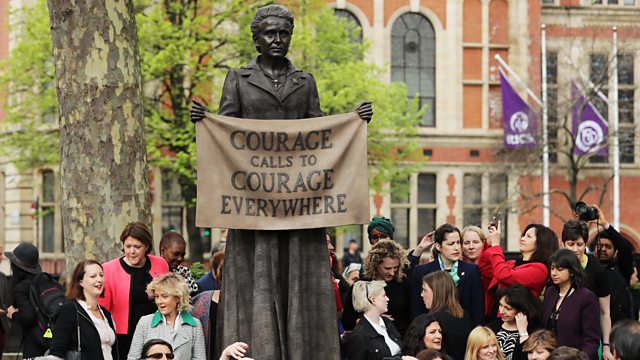 Arts news, interviews and reviews. The first statue of a woman in Parliament Square is unveiled today, but is it any good? Plus dramatist Joe Penhall talks about his new play.

Today the first statue of a woman in Parliament Square in London was unveiled. Millicent Fawcett, the suffragist who fought for women's right to vote in the early 20th century, joins 11 male figures including Sir Winston Churchill, Nelson Mandela and Mahatma Gandi. Art critic Estelle Lovatt gives her verdict on the artwork.

We talk to dramatist Joe Penhall, writer of the award-winning The Kinks musical Sunny Afternoon and hit play Blue/Orange, about his new work Mood Music, about a feuding singer and music producer.

Theatre and show effect lighting could be seriously affected by new EU regulations intending to make lighting and other electrical goods more energy efficient. Lighting designers Paule Constable and Patrick Woodroffe explain how the entertainment industry would be affected if the new proposals, which are currently in consultation, were to be implemented.

This year marks the 300 anniversary of Thomas Chippendale, arguably the greatest and certainly the most well-known furniture maker in the world. Front Row reports from the small town of Otley in Yorkshire, where Chippendale was born and started out in his trade as a cabinet maker and where celebrations are in full swing.

Find out more about the Save Stage Lighting campaign by the Association of Lighting Designers.

Find more information about Thomas Chippendale and events celebrating his 300th anniversary on the Chippendale 300 website.