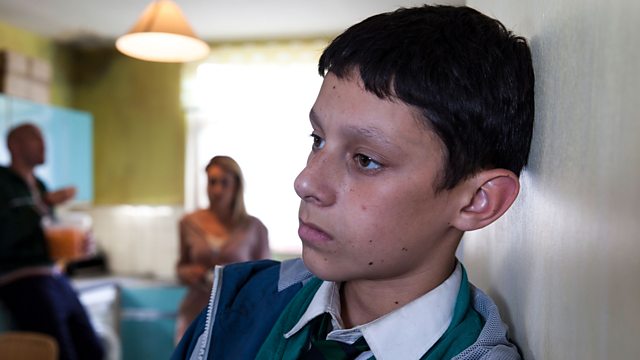 Joe All Alone Series 1
Episode 1 of 4

Drama series. Joe is upset to learn that his mum and her horrible boyfriend Dean are going on holiday to Spain for a week, leaving Joe behind on his own.

Joe and Asha are pursued down the platform at Paddington station by three men. Joe is caught and his backpack is ripped open, sending thousands of bank notes fluttering into the air. As Joe falls to the ground, we hear him start to tell us his story of how these events came to pass.

It's half term and Joe is upset to learn that his mum and her horrible boyfriend Dean are going on holiday to Spain for a week, leaving Joe behind on his own. Dean is very clear about the ground rules: he tells Joe not to leave the flat, that being home alone is a secret. If the authorities find out, they will blame his Mum, and Joe will be taken into care.

Soon, the thought of his new-found freedom excites Joe, yet when his mum doesn't call him on the first night, he starts to become anxious. Relief comes when he meets Asha, who is also feeling abandoned. She's had a fight with her mum and has run away to live with her grandad, Otis, who lives next door to Joe. Joe likes the idea of having a friend but knows that this will make keeping his secret that much harder.

Alone in the flat, Joe has mastered basic cooking skills, so he moves onto a bit of DIY in an attempt to fix the toilet flush. He lifts the lid and discovers a package left there by dodgy Dean. It's full of £20 notes, and it's got to be illegal!

See all episodes from Joe All Alone