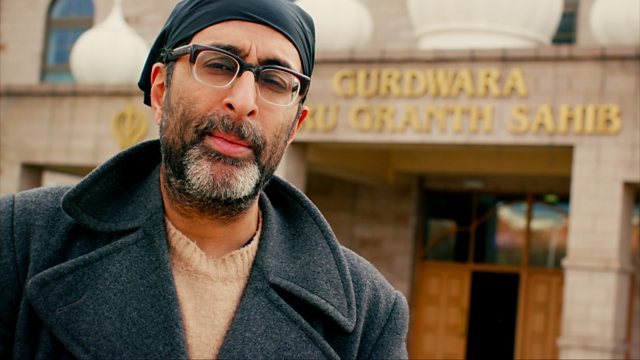 My Turban and Me

Documentary. Comedian Sanjeev Kohli explores the importance of wearing the Sikh turban in modern Britain and investigates why it is becoming more popular with young people.

Documentary exploring Sikh identity in modern Britain. Actor and comedian Sanjeev Kohli goes on a heartwarming personal journey to explore the importance of wearing the Sikh turban in Britain and investigate why it is becoming more popular.

Sanjeev, most famous for his role as Navid in the BBC1 comedy Still Game, comes from a proud Sikh heritage, but is the only male member of his family not to wear the turban and sees this journey as a reconnection with the Sikh community. He starts off by looking into his own family history, how his turban-wearing brothers were bullied at school, and questions whether he was right to make the decision at the age of 14 not to wear one.

As a father of teenagers, Sanjeev tries to find out whether attitudes towards the turban have changed over generations by meeting passionate young Sikhs in all walks of life. Over the course of his journey he discovers that, while many first-generation Punjabi immigrants wanted to try to fit in, their children and grandchildren are trying to stand out, and there is a resurgence of British Sikhs - both men and women - wearing the turban and reclaiming their identity. He also attempts to find out what lies behind this new-found enthusiasm to publicly embrace their religious identity.