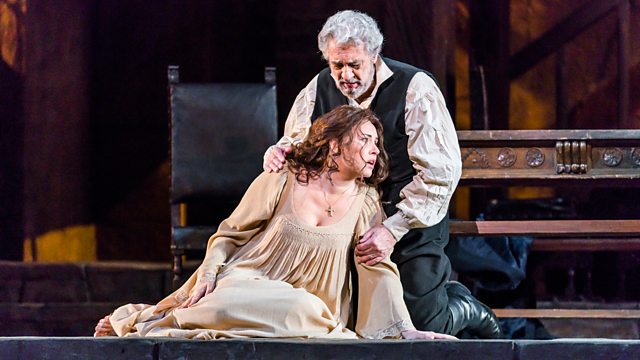 Placido Domingo stars in Verdi's rarely performed opera, Luisa Miller, from the Metropolitan Opera House, New York. It's a heart-wrenching story of fatherly love, based on the bond between Miller - sung by Domingo - and his daughter, performed tonight by Sonya Yoncheva. Verdi wrote this at a midway point in his career, so the score is full of youthful energy but mixed too with his characteristic passionate melodic writing.
Sonya Yoncheva sings the title role opposite Piotr Beczała in the first Met performances of the opera in more than ten years, and the Met Chorus and Orchestra are conducted by Bertrand de Billy.

On Luisa's birthday, the villagers have gathered outside her house to serenade her. She loves Carlo, a young man she has met in the village (Lo vidi e 'l primo palpito /"I saw him and my heart felt its first thrill of love") and looks for him in the crowd. Luisa's father, Miller, is worried by this mysterious love since Carlo is a stranger. Carlo appears and the couple sing of their love (Duet: t'amo d'amor ch'esprimere / "I love you with a love that words can only express badly"). As the villagers leave to enter the nearby church, Miller is approached by a courtier, Wurm, who is in love with Luisa and wishes to marry her. But Miller tells him that he will never make a decision against his daughter's will (Sacra la scelta è d'un consorte / "The choice of a husband is sacred"). Irritated by his reply, Wurm reveals to Miller that in reality Carlo is Rodolfo, Count Walter's son. Alone, Miller expresses his anger (Ah fu giusto il mio sospetto / "Ah! My suspicion was correct").

Wurm informs the Count of Rodolfo's love for Luisa. The Count orders his son to be brought to him and expresses his frustration with him (Il mio sangue la vita darei / "Oh, everything smiles on me"). When Rodolfo enters, the Count tells him that he is to marry Walter's niece Federica, the Duchess of Ostheim.

When Rodolfo is left alone with Federica, he confesses that he loves another woman, hoping that the duchess will understand. But Federica is too much in love with him to understand (Duet: Deh! la parola amara perdona al labbro mio / "Pray forgive my lips for the bitter words").

Miller tells his daughter who Rodolfo really is. Rodolfo arrives and admits his deception but swears that his love is sincere. Kneeling in front of Miller he declares that Luisa is his bride. Count Walter enters and confronts his son. Drawing his sword, Miller defends his daughter and Walter orders that both father and daughter be arrested. Rodolfo stands up against his father and threatens him: if he does not free the girl, Rodolfo will reveal how Walter became count. Frightened, Walter orders Luisa to be freed.

Scene 1: A room in Miller's home

Villagers come to Luisa and tell her that her father has been dragged away in chains. Wurm arrives and confirms that Miller is to be executed. But he offers Luisa a bargain: her father's freedom in exchange for a letter in which Luisa declares her love for Wurm and states that she has tricked Rodolfo. Initially resisting (Tu puniscimi, O Signore / "Punish me, o Lord"), she gives way and writes the letter. Wurm warns her that she must keep up the pretense of voluntarily writing the letter and being in love with him. Cursing him (A brani, a brani, o perfido / "O perfidious wretch"), Luisa wants only to die.

At the castle Walter and Wurm recall how the Count rose to power by killing his own cousin and Wurm reminds the Count how Rodolfo also knows of this. The two men realize that, unless they act together, they may be doomed (Duet: L'alto retaggio non ho bramato / "The noble inheritance of my cousin"). Duchess Federica and Luisa enter. The girl confirms the contents of her letter.

Rodolfo reads Luisa's letter and, ordering a servant to summon Wurm, he laments the happy times which he spent with Luisa (Quando le sere al placido / "When at eventide, in the tranquil glimmer of a starry sky"). The young man has challenged Wurm to a duel. To avoid the confrontation the courtier fires his pistol in the air, bringing the Count and his servants running in. Count Walter advises Rodolfo to revenge the offense he has suffered by marrying Duchess Federica. In despair, Rodolfo abandons himself to fate (L'ara o l'avello apprestami / "Prepare the altar or the grave for me").

A room in Miller's home

In the distance echoes of the celebration of Rodolfo and Federica's wedding can be heard. Old Miller, freed from prison, comes back home. He enters his house and embraces his daughter, then reads the letter she has prepared for Rodolfo. Luisa is determined to take her own life (La tomba è un letto sparso di fiori / "The grave is a bed strewn with flowers"), but Miller manages to persuade her to stay with him. (Duet: La figlia, vedi, pentita / "Your child, see, repentant"). Alone now, Luisa continues praying. Rodolfo slips in and unseen pours poison into the water jug on the table. He then asks Luisa if she really wrote the letter in which she declared her love for Wurm. "Yes," the girl replies. Rodolfo drinks a glass of water and passes a glass to Luisa, inviting her to drink. Then he tells her that they are both condemned to die. Before she dies, Luisa has time to tell Rodolfo the truth about the letter (Duet: Ah piangi; il tuo dolore / "Weep your sorrow is more justified"). Miller returns and comforts his dying daughter; together the three say their prayers and farewells (Trio, Luisa: Padre, ricevi l'estremo addio / "Father, receive my last farewell"; Rodolfo: Ah! tu perdona il fallo mio / "Oh, forgive my sin"; Miller: O figlia, o vita del cor paterno / "Oh, child, life of your father's heart"). As she dies, peasants enter with Count Walter and Wurm and before he too dies, Rodolfo runs his sword through Wurm's breast declaring to his father La pena tua mira / "Look on your punishment".