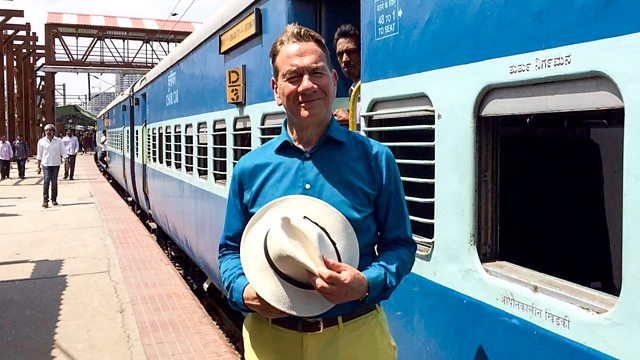 Michael Portillo journeys from Mysore to the first stronghold of the East India Company in Chennai. Michael pitches in at a game of street cricket.

Michael Portillo's Bradshaw's 1913 Handbook of Indian, Foreign and Colonial Travel leads him on railway journey through the modern south Indian states of Karnataka and Tamil Nadu, from the former princely state of Mysore to the first stronghold of the East India Company in Chennai, formerly Madras.

In Mysuru, Michael pitches in at a game of street cricket then smartens up to meet the Maharaja at the magnificent Mysore Palace. Michael's Bradshaw's tells him of an exceptional maharaja of the early 20th century, who sowed the seeds of the region's prosperity, and Michael finds his legacy in the Carnatic music he patronised and the flourishing local silk industry.

At sunset Michael joins selfie-stick wielding crowds back at the palace as they wait to capture it being illuminated by thousands of bulbs. An early morning yoga class is the perfect way to stretch out before boarding a train to Bengalaru. After a sticky encounter with a mango, he meets the entrepreneurs whose innovations are driving India's hi-tech boom with inventions from mobile heart scanners to cooking apps. In a Bengalaru suburb, Whitefield, Michael hunts for the remains of a utopian Anglo-Indian settlement, before sampling fusion food, Bradshaw's-style, in the guise of Mulligatawny soup and spiced-up bread and butter pudding. Michael's Bradshaw's leads him east to Bangarapet where he explores the eerie ruins that are all that remains of what was once the world's deepest gold mine. An air-conditioned superfast double-decker express speeds Portillo to the sprawling coastal city of Chennai, where he hitches a ride on a Royal Enfield motorbike and visits the famous Madras Club for gentlemen to find out more about The East India Company's beginnings in India.