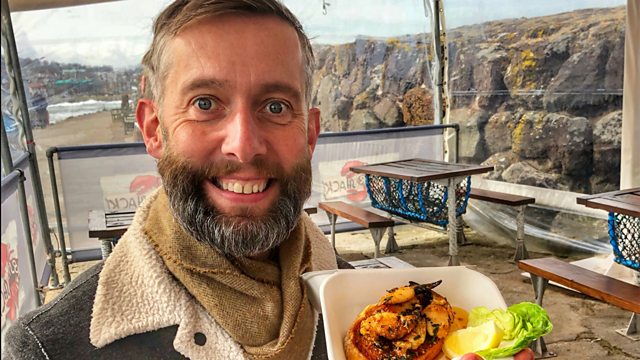 Simon Preston goes from creel to kitchen with two of Scotland's seafood goliaths, crab and lobster.

Simon Preston goes from creel to kitchen with two of Scotland's seafood goliaths, crab and lobster. One perhaps seen as too luxurious for the everyday and the other so intimidating many of us wouldn't know where to start picking through its carapace and claws for its soft sweet white meat or the strong rich brown meat.

But could all that change? Starting on the harbour wall in North Berwick Simon explores a local lobster hatchery. Set up and run by fishermen it's aim is to give nature a helping hand in increasing the local lobster population because they recognise the value of the lobster to the local community. It has led to lobster becoming a local delicacy enjoyed by all who visit the village.

At the other end of the price range local brown crab is becoming more and more popular. But it's the cracked claws that people want to buy. Determined to find every last morsel from the shell Dan Holland heads north to Kylesku to find out how to pick a crab, claw meat, white meat and the beautifully rich hidden away brown meat.

In her Kitchen at home Sumayya Usmani uses some of the white crab meat to make a quick orange dressed crab and paprika potato salad hash while Ghillie Basan recalls collecting crabs across the sandy shores of the Indian Ocean as a child and a crab ice cream as she scuttles round the world with a look at crustacean cuisine.

See all episodes from The Kitchen Café