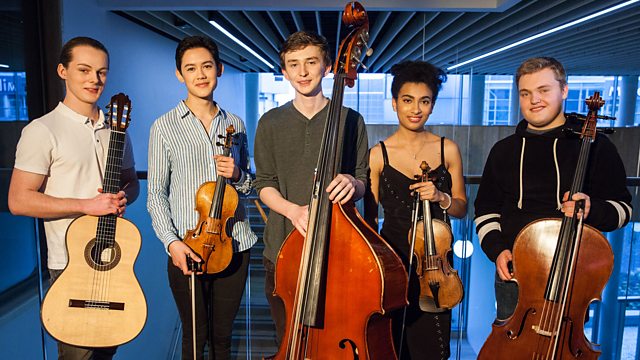 Five exceptional musicians have been selected for the strings final. The music they perform includes Bach, Brahms and Stravinsky.

As BBC Young Musician begins its 40th anniversary series, Josie d'Arby is joined by Alison Balsom, herself a finalist in 1998, to present highlights from the first of this year's category finals.

Since it was first held in 1978, the contest has showcased the UK's brightest and best musical talent. This year five exceptional musicians have been selected for the strings final. They are: 19-year-old violinist Elodie Chousmer-Howelles; 17-year-old double bassist Will Duerden; violinist Stephanie Childress who is 18; 17-year-old guitarist Torrin Williams; and cellist Maxim Calver who is 18 years old. The music they perform includes Bach, Brahms and Stravinsky.

Filmed in the Royal Birmingham Conservatoire's brand new concert hall, the programme introduces us to the five strings finalists, takes us behind the scenes to find out what it takes to compete at this level and features extensive highlights of each of the finalist's performances.

On hand to decide the category winner is a panel of leading experts. They are: renowned classical double bass virtuoso Leon Bosch; Milos Karadaglic, the award-winning classical guitarist from Montenegro; one of today's most exciting violinists Jennifer Pike who at 12 was the youngest winner of BBC Young Musician when she won in 2002; and the chair of the jury, composer, performer and writer Kerry Andrew.

Follow the competition over the next five weeks on BBC Four as 25 of the UK's most talented young musicians compete in the strings, percussion, woodwind, brass and keyboard finals. The winners will all take their place in the semi-final and compete for a chance to perform in the Grand Final at Birmingham's Symphony Hall with the City of Birmingham Symphony Orchestra conducted by Mark Wigglesworth. One will be named BBC Young Musician 2018.