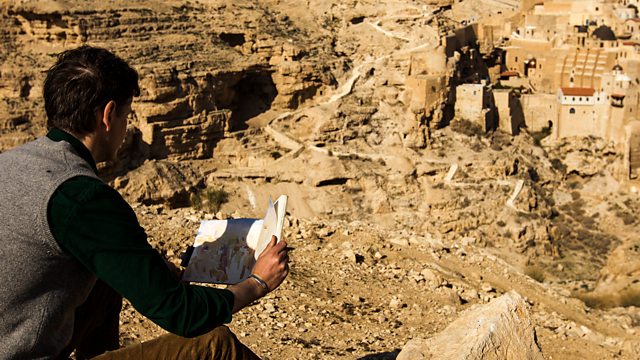 Artist Lachlan Goudie explores the role of Mary in the Bible with an artist's question - why is she such a shadowy figure in the gospels, but so well represented in art?

Lachlan Goudie traces the story of Mary through the gospels with a personal question - why is the life of the Mother of God barely described in the Bible, but so well-represented in art?

He looks at her role in the story of the Resurrection and the subsequent events up to Pentecost, fifty days after Easter. In Nazareth he visits the well where legend states the teenage Mary was visited by the angel Gabriel, and at one of seventeen Churches of the Annunciation sees the wealth of imagery that has helped secure for Mary a place in the hearts of the faithful. In Bethlehem, the birthplace of Christ, now in a grotto beneath the Church of the Nativity, he watches and draws pilgrims from all over the world.

Lachlan grew up hearing the Easter story from his Catholic mother. Taking his easel with him, he visits the places in the Holy Land most associated with Mary, seeing places and meeting people he knows his mother would enjoy, and carrying religious images drawn by his painter father to the source.

During this journey Lachlan discovers that Mary and her miraculous story are inspiring not just to Christians. Mary the Mother of Jesus is a major figure to Muslims, the only woman named in the Koran.

Part travelogue, part spiritual quest, part artistic exploration, this series transports the viewer visually and emotionally as Lachlan challenges himself to capture the look and feel of the Holy Land and the Bible story.

See all episodes from Painting the Holy Land