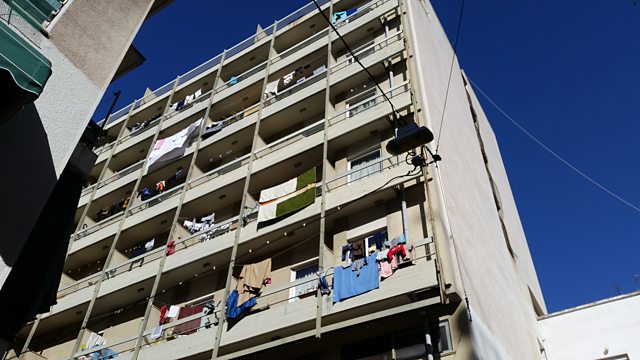 Thousands of refugees from across the world have come to live in Athens. But how - in the midst of its own economic problems - is the city finding homes for them?

In a rundown neighbourhood in Athens there is a hotel with 4,000 people on its waiting list for rooms. But the roof leaks and the lifts are permanently out of action. None of the guests pay a penny, but everyone's supposed to help with the cooking and cleaning.
City Plaza is a seven-storey super squat housing 400 refugees from 16 different countries and the volunteers who support them.
The hotel went bankrupt during the financial crisis. It remained locked and empty until 2015, when Europe closed its borders leaving tens of thousands of refugees trapped in Greece. Then a group of activists broke in, reconnected the electricity and water and invited hundreds of migrants from the streets to take up residence with them.
The leftist Greek government has so far turned a blind eye and now mainstream NGOs like MSF and even the UNHCR have started co-operating in this illegal project. For Crossing Continents, Maria Margaronis finds out how the hotel operates and get to know the people inside.

Digging Up the Past in Catalonia

The Child Saver of Mosul