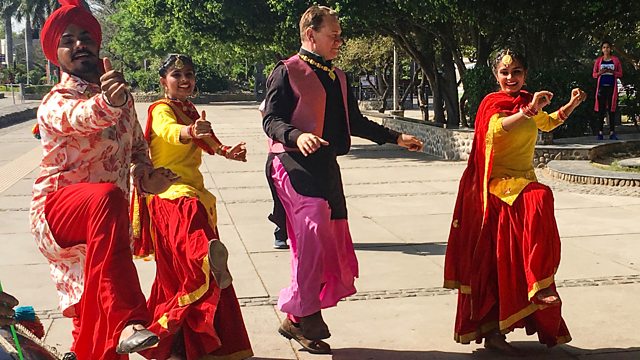 Guided by his Bradshaw's 1913 Handbook of Indian, Foreign and Colonial Travel, Michael Portillo embarks on a classic rail journey from Amritsar to Shimla.

Guided by his Bradshaw's 1913 Handbook of Indian, Foreign and Colonial Travel, Michael Portillo travels across India. He embarks on a classic rail journey from Amritsar to Shimla. Along the way, he helps to feed the thousands at the world's largest free kitchen and travels the railway routes used by millions of migrants partition. He gives his trademark colourful wardrobe an Indian twist and reaches the foothills of the Himalayas, where the epic Kalka to Shimla hill railway carries him to the former summer seat of the British rulers of the Raj.

Published when the British Raj was at its height, Michael's guide leads him to some of the key locations in India's 20th-century story, from the massacre in Amritsar in 1919 to the bloody events of partition.

Beginning in the Sikh holy city, Michael is dazzled by the beauty of the Golden Temple and awed by the scale of its langar - the world's largest free kitchen.

His route then takes him through the Punjab, India's breadbasket. Michael samples traditional chapattis, has a colourful kurta made up in one of the Punjab's biggest cloth markets, and can't resist the foot-tapping rhythms of Punjabi bhangra dancing, made famous by Bollywood. Portillo's journey also reveals surprises. He uncovers a pioneering women's medical college in Ludhiana, before plunging into Chandigarh, designed by Le Corbusier as a modernist expression of India's post-independence future.

At Kalka, Michael glimpses the Himalayas for the first time and joins the 1906-built mountain railway for a stunning climb to Shimla. There, he relives the days when the creme de la creme of expatriate society went to socialise and rule - their exploits recorded by a young Rudyard Kipling.