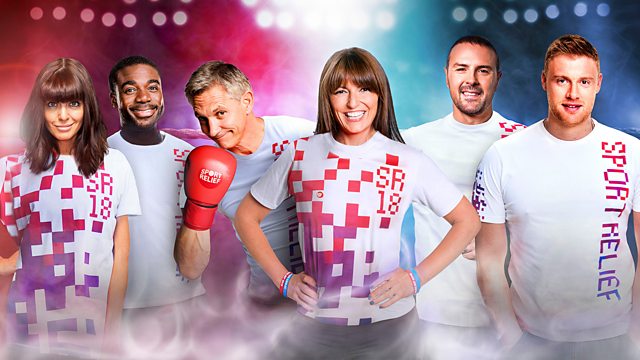 Some of the biggest stars and TV shows come together to try and raise money for good causes in the UK and overseas, live from MediaCityUK in Salford.

Gary Lineker, Davina McCall and Ore Oduba kick off the biggest ever night of Sport Relief. Kylie Minogue performs live, while Wembley Arena hosts a special footballers' edition of Strictly Come Dancing with legends David Ginola, Alex Scott and Chris Kamara battling it out on the dance floor and watch out for a very special appearance from John Barnes. Magician Ben Hanlin goes behind the scenes at Sports Personality of the Year wowing sporting legends like Anthony Joshua, Harry Kane, Paula Radcliffe and Michael Johnson with his tricks. Salford Quays provides the setting for the clash of the channels as some of the BBC's top faces go head to head against top talent from ITV in Celebrity Boat Race. And there are regular updates from the piazza at Media City as we catch up on Robbie Savage's All Stars in their non-stop football marathon.

Claudia Winkleman and Paddy McGuiness take on the baton as Sport Relief continues with John Bishop attempting to help the England football team in their preparations for the World Cup finals with comical consequences and cameos from Harry Kane, Dele Alli, Jonny Wilkinson, Sir Geoff Hurst, Marcus Rashford and Jesse Lingard. There's the first of our big Celebrity Boxing fights as two brave celebrities go head to head in the ring. Rob Brydon and the cast from Swimming With Men feature in a hilarious sketch, plus Big Shaq makes a special live appearance. And, in an exclusive, Sir Andy Murray gets the shock of his life when Michael McIntyre and celebrity friends wake him up to play a very special edition of his Midnight Gameshow. There's also more music from Snow Patrol.

See all episodes from Sport Relief