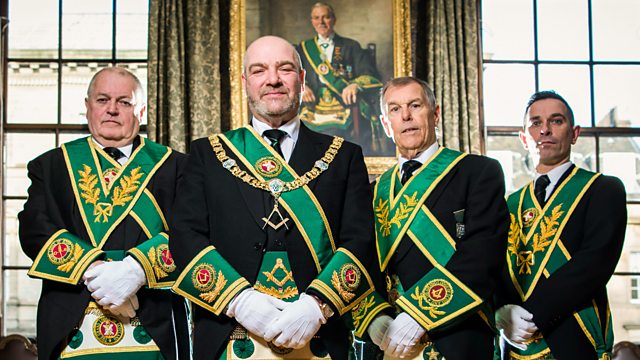 Secrets of the Masons

Documentary that goes behind the doors of the Grand Masonic Lodge of Scotland, in Edinburgh, lifting the veil on the inner secrets of this normally closed world.

In Secrets of the Masons, cameras for the first time go behind the doors of the Grand Masonic Lodge of Scotland, in Edinburgh, the home of freemasonry, and lift the veil on the inner secrets of this normally closed world. With exclusive access to its 400-year-old archive, its members around the country and its grand master, who presides over 1,000 lodges and 100,000 Scottish Freemasons worldwide, we film at lodge meetings, the selection of new candidates and the installation of grand masters.

This documentary explores the truth about an organisation characterised by many for funny handshakes and rolled trouser legs, and by others as a dangerous, secret society, "the hidden hand that has shaped Scotland".

We discover famous Scots whose careers have been "helped" by being masons, including Robert Burns and leading light in the Scottish Enlightenment, James Watt. Deputy Scottish Grandmaster Ramsay McGee, ex assistant chief constable of Northern Constabulary, remembers when, in the 1970s, 50 per cent of the force under him were masons. But he defends the close links between freemasonry and the police - "I could argue all policemen should be masons, it would make them much better men!"

In the bomb-proof safes below the grand lodge in Edinburgh's George Street, archivist Robert Cooper, in white gloves, finds the original minutes of the first lodge meeting in 1598. We trace how this organisation grew from stonemasons to freemasons, became enshrined in America, where 40 per cent of presidents have been masons, was banned by the Pope and Hitler, and "done in", in Robert Cooper's words, by Dan Brown. And we ask if its lasting legacy is less its influence and more its secrecy.

See all clips from Secrets of the Masons (4)