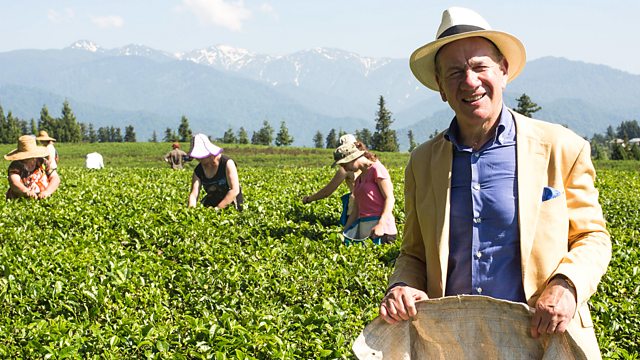 Michael Portillo travels from the Black Sea to the Caspian Sea. Michael discovers a surprise 19th-century tea plantation in the West Georgian countryside.

Steered by his 1913 Continental Railway Guide, Michael Portillo travels one of the most stunning rail routes of the world, through the former Russian empire from the Black Sea to the Caspian Sea, taking in present-day Georgia and Azerbaijan.

Following the historic Trans-Caucasus Railway, Michael begins in the port of Batumi on the dazzling Caucasian Riviera. He savours the soul of Georgia in its wine and discovers a surprise 19th-century tea plantation in the West Georgian countryside. The seat of power beckons in Kutaisi, home to the wonderful glass dome built for the Parliament of Georgia when it moved here from the capital, Tbilisi, in 2012. At the medieval convent of Gelati Michael sees how magnificent frescoes are being painstakingly restored and finds out about the most powerful king in Georgian history.

The daring rail line, built in the late 19th century to haul oil across the Caucasus from Baku to Batumi, reveals grand views from viaducts and passes through a 4km-long tunnel blasted through mountain rock. Arriving in Tbilisi, Michael is struck by the warm welcome of Georgians and is invited to a wedding, where he experiences the legendary feast known as a supra. At a private museum dedicated to the life of the most infamous Georgian, Joseph Stalin, Michael asks how Georgians today feel about the former dictator of the Soviet Union.

From Tbilisi Michael takes a trip along the 120-mile Georgian Military Road, built by the colonising Russian army in the early nineteenth century. Skirting disputed Georgian territory occupied by Russians today, Michael discovers that a Briton was the first to conquer the highest mountain in the Caucasus range. To capture his own view of the mighty Mount Kazbek Michael boards a helicopter to soar above the 5,000-metre peak first climbed in 1868.