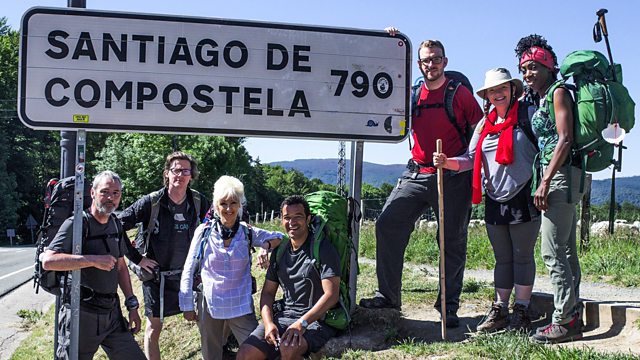 Pilgrimage The Road to Santiago
Episode 1 of 3

Seven people living in the public eye say goodbye to their hectic lives, don backpacks and walking boots, and set out on the famous Camino de Santiago pilgrimage. They have only 15 days to tackle this ancient 780km path across northern Spain to the Cathedral of Santiago de Compostela and the shrine of St James. But will this journey of a lifetime change the way they think about themselves and their faith, as well as exploring whether a medieval pilgrimage has any relevance in the modern day?

Actor Neil Morrissey, entertainer Debbie McGee, comedian Ed Byrne, singer Heather Small, priest Kate Bottley, journalist Raphael Rowe and TV presenter JJ Chalmers live as modern-day pilgrims, staying in basic hostels and often sleeping in dormitories, on bunkbeds. Pilgrims who walk all of the Camino, take at least a month. But with just over two weeks on the road, the seven are travelling some of the route by minibus, until they reach the final 100km, when they will walk every step of the way.

In this first episode, the intrepid seven arrive in Biarritz and make their way to the start of their pilgrimage, a small town in the foothills of the French Pyrenees, St-Jean-Pied-de-Port. They are shown a copy of the ancient Codex Calixtinus, a medieval guide to the route, before heading to the Pilgrims' Office where they register and collect their all-important pilgrim passports, which they'll get stamped wherever they stop along the way.

Episode 2—The Road to Santiago

See all episodes from Pilgrimage