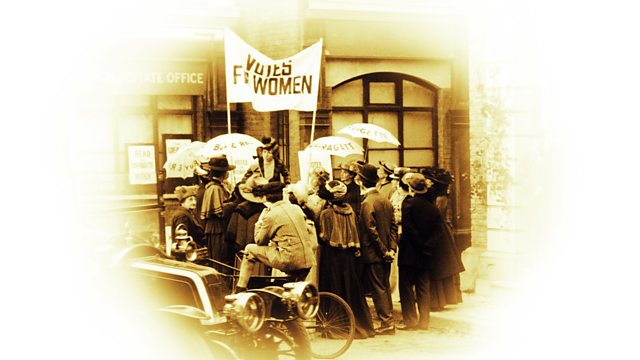 A cast of actors local to Gateshead perform extracts from some of the little-known plays by over 400 female playwrights who were helping in the campaign for votes for women.

From a factory worker who mistakenly goes to an anti-suffrage meeting and can't stop herself speaking out, to a titled lady seeking her friend's help in writing an anti-suffrage speech, only to be constantly interrupted by a stream of highly qualified and articulate women, this specially recorded programme presents a selection of Suffrage dramas hosted by Eleanor Rosamund Barraclough and performed by actors local to the area in front of an audience at the Free Thinking Festival in St Mary's Church, Gateshead.

There were over 400 women playwrights in Britain from 1900- 1920 and, in 1908, the Actresses' Franchise League and Women Writers' Suffrage League were both formed specifically to help the campaign for votes for women. The background to the plays will be discussed by Naomi Paxton, a researcher for 'What Difference Did the War Make? World War One and Votes for Women', which is part of Parliament's Vote 100 project. She's also a New Generation Thinker who has edited the Methuen Drama book of Suffrage Plays. They are joined by Diane Atkinson, historian, biographer and author of 'Rise up, Women!: The Remarkable Lives of the Suffragettes'.