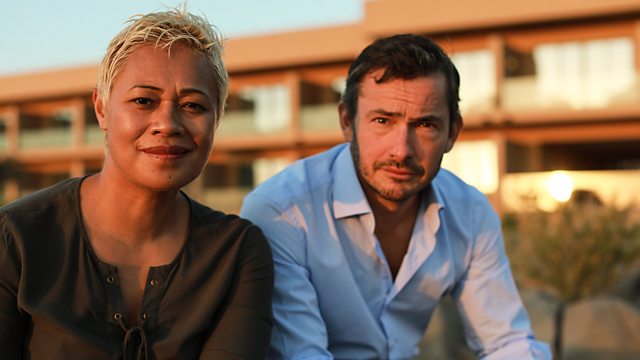 Giles and Monica travel to Oman to visit a resort that seeks to blend local tradition with modern tastes.

In the second episode, Giles and Monica travel to the Anantara Al Jabal Al Akhdar in Oman. It is the highest five-star hotel in the Middle East and a resort seeking to blend local tradition with modern tastes. Built to resemble an ancient Omani fort, and situated 2,000 metres above sea level on the rim of a dramatic canyon, the hotel has recently made the most of its location by constructing a jaw-dropping via ferrata and zip-wire rope course along the cliff edge. Led by the hotel's mountain guru Maher, Giles and Monica undertake a test-run of the stunning adventure course before it opens to guests, facing 30-metre drops and Giles's profound fear of heights.

Giles is marginally more comfortable learning how to drum and sing, a customary Omani welcome, as he works alongside Nasser, overcomes road rage with driver Mubarek on the relentless gradient of local mountain roads and meets visionary architect Lotfi, who reveals the challenge of constructing a resort on military land and designing 34 pools that respect a cultural need for privacy.

Giles comes into his own on shift with Indian head of housekeeping Ateev, who demonstrates the merits of rosewater and embroils Giles in a magical team-building game of cricket against the might of Food & Beverage. Monica works with one of the few Omani women working at the hotel, food hygiene manager Marshaal, whose ambition is to be the first Omani female GM. Monica also accompanies British general manager and former soldier Darren Darwin on his rigorous morning inspections, flings saj bread dough on a breakfast shift with Chef Mahmoud, picks local pomegranates with Sheik Abdullah and buys a local goat to be prepared using a traditional shuwa recipe, cooked underground and served as international canapes. The hors d'oeuvres are devoured at the hotel's one-year anniversary party, which culminates in a spot of midday dancing for the assembled staff, guests, children - and men juggling guns.

See all episodes from Amazing Hotels: Life Beyond the Lobby