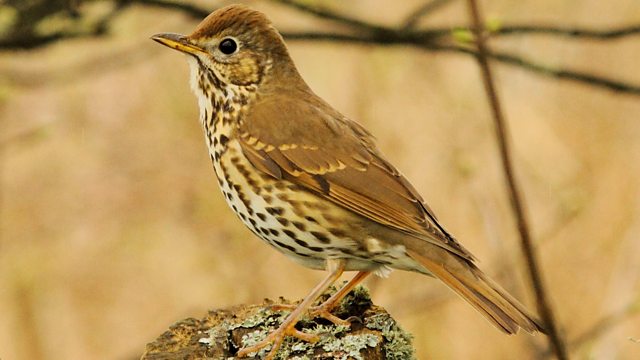 Chris Baines on the Song Thrush

Naturalist and environmentalist Chris Baines loves the musicality of the Song Thrush and enjoys the territorial song battles in his neighbourhood.

In another of his TWEETS about the birds which are encouraged by his 'wildlife-friendly' garden, naturalist and environmentalist Chris Baines describes the wonderful song battles for territory and mates between Song Thrushes in his and his neighbours' gardens. His garden pond is also raided by these musical songsters for mud and wet leaves to line their nests.
Tweet of the Day has captivated the Radio 4 audience with its daily 90 seconds of birdsong. But what of the listener to this avian chorus? In this new series of Tweet of the Day, we bring to the airwaves the conversational voices of those who listen to and are inspired by birds. Building on the previous series, a more informal approach to learning alongside a renewed emphasis on encounter with nature and reflection in our relationship with the natural world.

Chris Baines on the Goldcrest