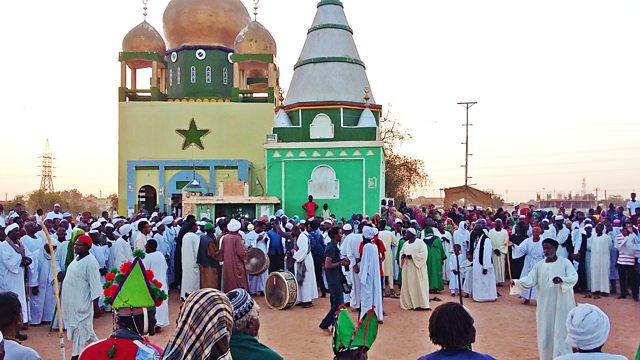 Yousra Elbagir explores the musical life of Sudan in light of the political changes of the 1980s, looking at what was lost, what survives, and how the country is opening up again.

Sudanese journalist Yousra Elbagir investigates the musical life of Sudan, past and present, in light of the changes wrought in the 1980s by Islamic rule. She explores what was lost, the possibilities of musical performance in the capital Khartoum at the moment, and the forces at play in a culture that seems to be opening up again.

Music used to be everywhere in Sudan, especially in Khartoum. As a hub of migration of foreign nationals, colonial officers, West Africans on their way to Mecca, and rural migrants, its music represented a melting pot of all incoming influences. The heyday was between the 1950s and the 70s, when jazz seeped out of the night spots which peppered the streets of the city. Later they throbbed to rock and disco.

During the 70s an all-girl trio called The Nightingales were hugely popular, though their routines and outfits were considered slightly risqué even then by conservatives - they became known as the Sudanese Supremes. And Sharhabeel Ahmed melded rock and roll and jazz influences with Sudanese music, with his wife Zakia playing electric guitar in the band.

But the rise of Islamism produced an assault on popular culture. With the 1983 September Laws the then president Jafer al-Nimeiri declared Sharia Law. With the establishment of an Islamic state after the coup in 1989, a series of public order laws in the early 1990s aimed to eradicate un-Islamic cultural practices. Music was haram: forbidden. What songs there were had to glorify religion and the war in the south; it was forbidden for men and women to dance together. Some singers were detained. Many left the country.

The same government may still be in power but there seems to have been a shift in policy since around 2010. Love songs are permitted again, but dancing on stage remains outlawed in the main. The Nightingales, Al Balabil, have reformed.

Recently there's been a flowering in Sudan: a new wave of young musicians taking up music, after decades of difficulties.

In these two features Yousra, who was born in Khartoum and brought up between Sudan and Britain, looks at what remains of the music scene in Khartoum. Having missed the golden age of Sudanese music by a long way (she is in her twenties), she tries to recover that era by talking to the older generation, those who remember the days when Louis Armstrong and Ray Charles would come to town to perform. She explores the changing atmosphere of the 70s, 80s and early 90s, the restrictions brought in after the coup in 1989, and looks at what music means in a country that has faced famine, civil war and economic and political crisis. And she talks to legendary musician Sharhabeel Ahmed, who managed to stay the course.

In programme 2 Yousra visits a ground-breaking music festival in the northern desert of Sudan, on the banks of the Nile, to meet musicians working in Sudan now. It's a world of grey areas and red lines. She meets the all-female band Salut Yal Bannot, who are pushing at the boundaries and addressing issues facing women in Sudan. But for those trying to incorporate dancing into their performances, like Amjad Shakir, who represented Sudan on The Voice (Arab World), the morality police are waiting at the end of each public performance. Those brought up outside the country who are forging international careers, like Ahmed Gallab (Sinkane) talk about their musical connection to Sudan; electronic musician Sufyvn describes DJing in a city where dancing is still not acceptable. Yousra asks what young creatives are up against in a country where there are still such restrictions, and stigma clings strongly to the profession of musician - especially for women. If things are opening up now: how much, and for whom?