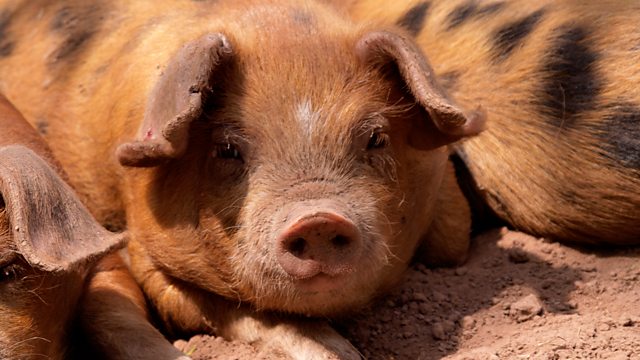 Tim Hayward travels the country to meet some of the people who breed and champion rare breeds of British pigs like the Oxford sandy, the large black and the Tamworth.

Tim Hayward embarks on the big pig road trip to meet some of the people who devote their lives to rare breeds of British pigs. He speaks to Adam Henson, best-known as a presenter on BBC One's Countryfile, about why pigs like the Gloucester Old Spot and Tamworth are important to the heritage of the UK, and explains the work his late Father Joe did to keep these breeds alive. Two of Adam's Tamworth pigs became the starting point for brothers John and Nick Francis who came to pig-keeping fresh out of university and now produce meat for a number of Michelin-starred restaurants. Robert Buttle gives Tim slices of artisan charcuterie which he produces from his Large Blacks and Oxford Sandys and explains why pork of this quality needs to be treated like the finest steak. Tim also meets the next generation of pig keepers at Holme Grange School in Berkshire and discovers that showing pigs is not as easy as it looks.