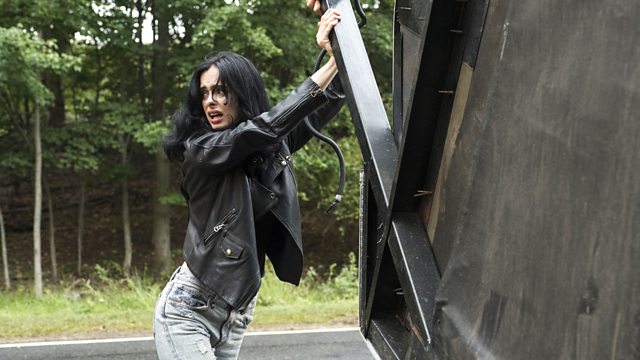 Jessica Jones reviewed by Gavia Baker-Whitelaw, Alex Clark looks at the nominees for the Women's Prize for Fiction, The Cherry Orchard and redressing the gender balance in music.

Reluctant superhero Jessica Jones is back for a second series. She despatched her nemesis at the end of season one but season two finds her looking to find the answers for her special powers. Cultural critic Gavia Baker-Whitelaw reviews.

The longlist for the Women's Prize for Fiction has just been published. On International Women's Day Alex Clark looks at the surprise inclusions and exclusions and discerns the trends.

This week a new production of Chekhov's The Cherry Orchard opens at Bristol Old Vic. The play, in which the son of a serf takes over the estate where his father was once a slave, is a new translation from playwright Rory Mullarkey. Kirsty speaks to Rory and actor Jude Owusu about the contemporary resonances in their production.

Marion Leonard, author of Gender In the Music Industry: Rock, Discourse, and Girl Power and festival promoter Melvin Benn, Managing Director of Festival Republic, discuss why men outnumber women in the public eye and behind the scenes of popular music.

The second series of Jessica Jones is now available for download from Netflix.

Image: Jude Owusu as Lopakhin in The Cherry Orchard

Redressing the gender balance in the music industry

Image:  Women at the PRS' 2017 Oram Award that promote women innovators in sound and music.

Keychange: a European-funded initiative that aims to get gender balance in music festivals to 50:50 by 2022, by supporting 10 women music creators and 10 innovators from each country to travel to work/perform on a music festival in Europe or Canada

ReBalance: a programme that provides 1 weeks' studio time to a different women artist or band each month; 2 studio engineer apprenticeships for women, and opportunities for women artists to play at UK festivals.