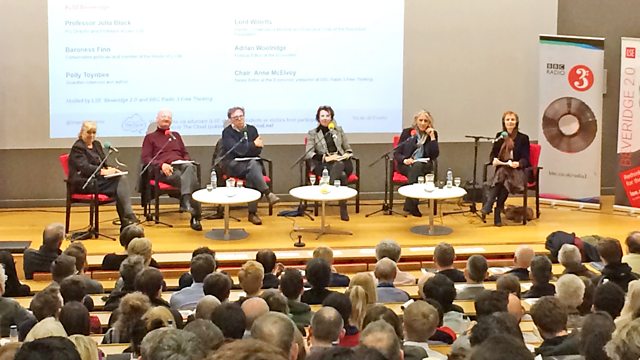 How Big Should the State Be?

As part of the LSE Festival of Ideas, BBC Radio 3's Free Thinking explores the idea of the modern state. What should be the ideal size and role of the state in the 21st century?
Over 75 years ago, the publication of the Beveridge Report heralded the founding of the post-war welfare state, and next year the NHS will celebrate its 70th anniversary. Yet now the state can seem like an outdated concept. Both Right and Left champion localism, empowerment and autonomy. Anne McElvoy is joined by:

Polly Toynbee, Guardian columnist and author of several books including Dismembered: How the Attack on the State Harms Us All.

Baroness Simone Finn, a Conservative politician and member of the House of Lords. She is a former government adviser on industrial relations, efficiency and civil service reform.

Julia Black, Professor of Law at LSE, who has advised policy makers and consumer bodies on institutional design and regulatory policy.

Adrian Wooldridge, Politics editor of the Economist and writes the Bagehot column, an analysis of British life and politics, in the tradition of Walter Bagehot, the Economist's 19th century editor.

The Joy of Bureaucracy

What Lies Beneath; Neanderthal Cave Art to Fatbergs