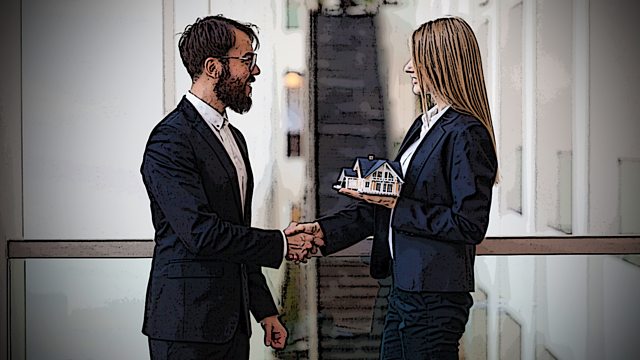 Would-be writer Mark and artist Lisa long to escape from their uncreative lives as estate agents. A chance encounter with a wealthy client offers them an unexpected ray of hope.

A romantic comedy by Guy Meredith and Zalie Burrow set in an estate agent in North London.

Would-be writer Mark and artist Lisa work alongside each other, but both are yearning for a more rewarding life. Their boss comes up with an exciting challenge that could earn them a lot of money and increase their chances of leaving, but it is conditional on making one big sale. Their prospective client seems wealthy enough and all seems to go well - but a hitch sees their dream fading.

Along the way, they have fallen for each other, but the prospect of the sale falling through means the possible end of both their professional and romantic futures.

Guy Meredith has written many dramas and comedies for Radio 4 and Radio 3, including BBC entries for the Prix Italia and Prix Futura.

Catrin Stewart (Lisa) and John Heffernan (Mark) are both successful young actors - Mark recently played Lord Altringham in the second series of The Crown, while Catrin has been a regular in Doctor Who as well as starring in the acclaimed theatre production 1984.

The cast also features the very experienced film and TV actor Philip Jackson as their very pushy estate agent boss, Ricky Norwood from EastEnders as his over-keen assistant, and leading stage and TV actor Nicholas Le Prevost as Myles the wealthy client, with Rachel Atkins as Selena, his much younger girlfriend.

Director Cherry Cookson has produced and directed many award winning plays and comedies for the BBC.

An Instinct for Kindness