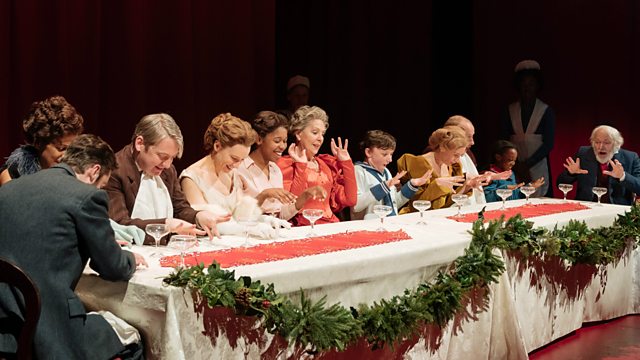 A look at Fanny and Alexander at the Old Vic, Swedish-Egyptian film The Nile Hilton Incident, Toby Litt's Notes For a Young Gentleman and a cross dressing exhibition.

Fanny and Alexander opens at London's Old Vic Theatre. Adapted from Ingmar Bergman's award-winning 1982 film, how well does such a sumptuous film transfer to the stage?
Also coming from Sweden is our film this week (well, to be more accurate, it's a Swedish/German/Egyptian co-production). The Nile Hilton Incident tells the true story of an Egyptian policeman investigating the death of a nightclub singer in Cairo, as The Arab Spring is beginning. But the justice system seems intent on stymieing his work.
Toby Litt's latest novel is Notes For a Young Gentleman. It's told in the form of advice left behind by a WW2 soldier after a mission that went wrong.
In Tones Drones and Arpeggios; The Magic of Minimalism on BBC4, Charles Hazlewood interviews La Monte Young and Terry Riley about the movement which stripped music back to its sonic essentials and power
The latest exhibition at London's Photgraphers' Gallery is 'Under Cover, a Secret History of Cross Dressers' Made up of a collection of amateur 'found photographs' from Europe and the US dating from 1880 onwards, it explores the many manifestations of gender non-conformity and cross-dressing.

The Nile Hilton Incident (Cert 15) is on limited release

Notes For A Young Gentleman

Under Cover: A Secret History of Cross-Dressers

Under Cover: A Secret History of Cross-Dressers is at The Photographers’ Gallery in London until 3rd June

Tones, Drones and Arpeggios: The Magic of Minimalism

Tones, Drones and Arpeggios: The Magic of Minimalism is on BBC 4 on Friday 9th March at 2100.

Tom: Mum and This Country