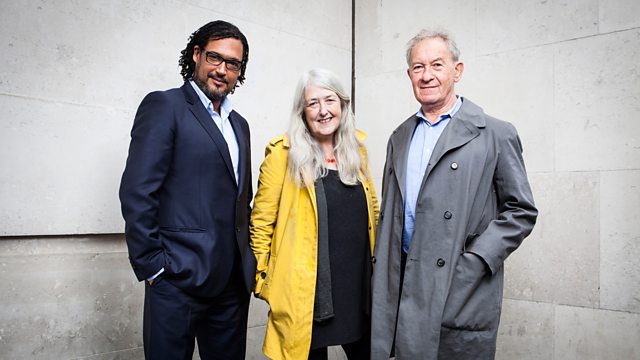 We review new TV series Civilisations, poet Wendy Cope on her new collection and how political is contemporary Chinese art?

Half a century after Kenneth Clark's ground-breaking television series on the history of art, Civilisation, the BBC has returned to the same subject - a history of visual culture - but pluralised the name and the number of presenters in the new series. Former television critic of the Financial Times Chris Dunkley and writer and classicist Natalie Haynes review.

Wendy Cope is one of the country's best-known and best-loved poets, thanks partly to the fact that her poems are easy to understand and often funny. But they're much more than that: the former poet laureate Andrew Motion said of her that "there is a skip in her step, but these are perfectly serious poems". Her latest collection is Anecdotal Evidence and it reflects on marriage, place, contentment and loss.

The works of twenty-three female contemporary artists working in China today are the focus of NOW, a new series of exhibitions across the UK. Curator Tiffany Leung and British-based artist Aowen Jin consider the status of Chinese female artists inside and outside China and to what extent they feel they have artistic freedom in the current political climate .

Jess Thom on Beckett's Not I, Disbelieved women in fiction, Deep Throat Choir

Civilisations begins on BBC Two on 15 Mar at 9 pm

NOW project at the Centre for Chinese Contemporary Art in Manchester