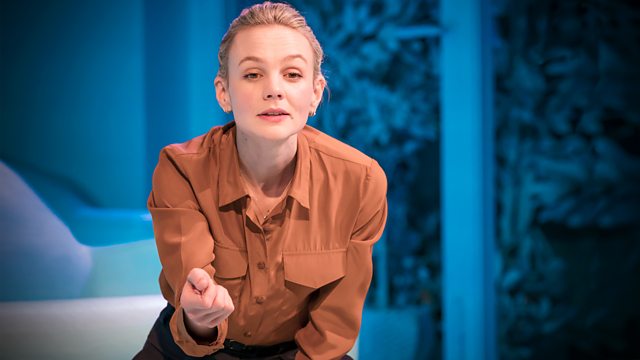 Carey Mulligan, Spoiler Alert!, Mosaic and the Death of the Lead Guitar

Carey Mulligan on her one woman show. Spoilers, and how to avoid them. Steven Soderbergh's TV drama Mosaic reviewed. And are the days of the lead guitar numbered?

Playwright Dennis Kelly's emotional new play Girls and Boys centres on the story of a woman in an aggressive man's world. Kelly and actor Carey Mulligan, the star of the one-woman show, discuss the disturbing themes in the play and the challenges of performing it.

Following a major leak from the Game of Thrones set - and the accompanying outrage - we ask writer Gareth McLean and TV critic Emma Bullimore whether our aversion to spoilers has now gone too far.

Boyd Hilton reviews Mosaic, a new TV drama series from Steven Soderbergh, which stars Sharon Stone as a murdered novelist. The HBO series is accompanied in the US by a mobile phone app whereby the viewer can choose from which perspective the plot is viewed.

Matt Bellamy, the axeman who fronts Muse and is famous for his searing solos, has said the guitar as a lead instrument is dead. It has retreated into the texture of the music. Front Row plays a lament in tribute to the lead guitar, as it loses its leading role.

I, Tonya; Robin Cousins on the art of ice skating; Jess Kidd

Girls and Boys is at the Royal Court until 17 Mar

Mosaic is available on Sky Atlantic