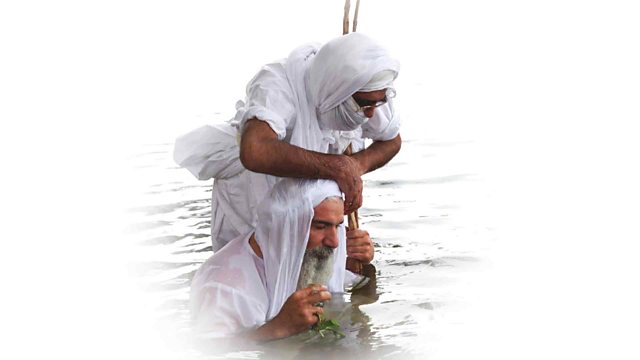 The ancient Mandean religion. Can we live without being judged? Should we give to charity?

The Mandaean religion predates Christianity. Now two universities are documenting some of its most important rituals online for generations to come.

The Mandaean religion predates Christianity. Now two universities are documenting some of its most important rituals online for generations to come. Fiona Clampin reports.

The Very Rev Andrew Tremlett, Dean of Durham Cathedral, tells Martin about the Open Treasure exhibition "Tudors: the family and faith" which highlights the impact of the dynasty on the Cathedral.

In the aftermath of the events that have put Oxfam in the news this week we ask "should we stop giving money to overseas-aid charities?" Veteran field-worker Paul Hardcastle says yes and Paul Vallely, a religious-affairs journalist and academic expert on aid and development says no.

Bishop Bertin Mwale Subi, the bishop of Katanga in the Democratic Republic of Congo, tells Martin why he's calling on President Kabilla to hold elections in December and says there will be indescribable chaos if they don't take place.

Zayid Marar is a writer who's about to publish a book called Judgement - the Value of Being Misunderstood. Martin talks to him about how a society can't function without judgement and how that relates to religion.

Christopher Lamb explains why the Pope's informal, non-clerical, accessible style of management is fine when things are going well but not so helpful when things go wrong.

Austin Eubanks, who survived the Columbine shooting in 1999, and Patrick Carolan, Executive Director of the Franciscan Action Network, respond to the mass-shooting at a high school in Florida.

Photo: courtesy of the University of Exeter.