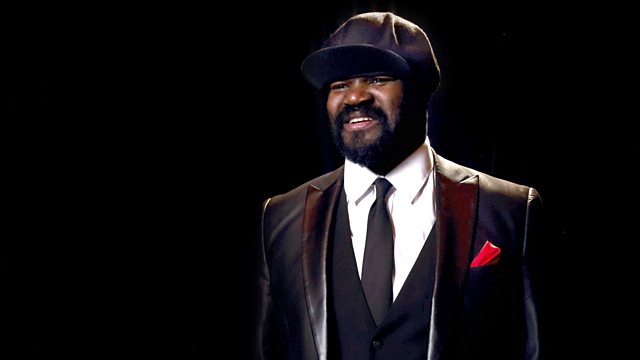 Gregory Porter in concert with The BBC Concert Orchestra, BBC Big Band and special guests Imelda May and Tony Momrelle, from the London Coliseum. Conducted by Mike Reed.

Friday Night Is Music Night is very proud to present 'Gregory Porter and Friends' at the London Coliseum. Gregory Porter is a modern jazz singer with a classic jazz pedigree. Born and raised in Sacramento and then Bakersfield, he began singing in church where his mother was a minister. After a shoulder injury forced him out of a career in American football, he began singing in Brooklyn and then Harlem, releasing two albums before being signed by the famous Blue Note label. Since then he has enjoyed a meteoric rise to fame. His gold album 'Liquid Spirit' reaching the UK top ten and winning a Grammy in 2014. Countless concerts and appearances have followed, including the Pyramid stage at Glastonbury. In tonight's concert he brings his extraordinary vocal talent to a selection of songs made famous by his idol Nat King Cole, as well as his own award winning songs, contemporary classics, and standards from the Great American Song Book, including songs by Hoagy Carmichael and Ray Charles. With special guests Imelda May and Tony Momrelle, the sixty piece BBC Concert Orchestra and the BBC Big Band, conducted by Mike Reed, this will be an extraordinary night to remember.
First broadcast in February 2018