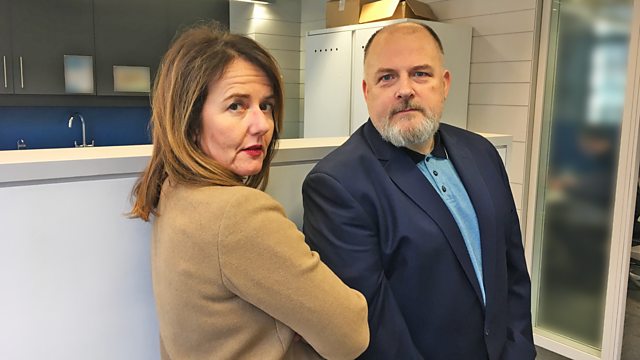 Flirting with the Boundaries Series 1
Episode 5 of 5

Fi Glover and Peter Curran find out how relations between men and women are being redefined in the aftermath of the Harvey Weinstein scandal and #MeToo.

Relations between men and women are in a state of flux. Fi Glover and Peter Curran go on the road to find out how recent events have influenced standards of acceptable behaviour in Britain.

Episode 5:
Fi visits an active retirement group in Ramsgate and speaks to Manchester on the Mike Sweeney phone in.

Fi is a self-confessed liberal feminist, Peter grew up in the very traditional and masculine culture of 1970s Belfast. Both are old radio colleagues. Together, they travel around the country to find out how relations between the sexes are being redefined in UK workplaces - from call centres and comedy clubs to chicken factories.

Fi Glover says, "Social change is usually only identified in the rear view mirror of history, but we are going to try and run alongside this one and find out if we are living through one of the most significant cultural shifts of recent times."

With the revelations of the last six months - Harvey Weinstein, Kevin Spacey, the equal pay furore, the banning of grid girls and #MeToo - have we reached a really significant, historic point in time? Is this a sea change across every ocean - or just in some elitist millponds?

From Cardiff to Canterbury, Belfast to Ramsgate, Fi and Peter set out to discover whether a consensus exists in Britain on acceptable behaviour between the sexes today.

Belfast Has Something to Say—Series 1

See all episodes from Flirting with the Boundaries