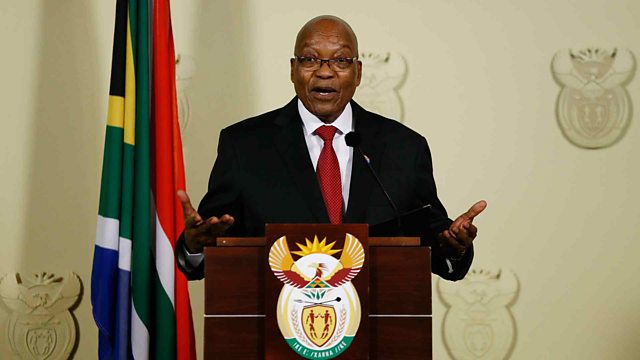 Kate Adie presents a programme reflecting on two men's political careers which effectively ended this week. Andrew Harding in Johannesburg reflects on the demise of Jacob Zuma who finally bowed to months of pressure and quit as president of South Africa; while Jenny Hill, reporting from Cologne, considers what the resignation of Martin Schulz, as leader of the Social Democrats (SPD), says about the current state of German politics. Meanwhile Katty Kay has to persuade a nervous Moscow-born taxi driver that it really is safe to drive her to Compton, the city once synonymous with gang violence and murder and made famous - or notorious - by NWA's album, "Straight Outta Compton". The death of a Cold War-era contact prompts Nick Thorpe in Budapest to consider how attitudes to the media more than thirty years ago seem eerily to be returning. Finally,Justin Rowlatt intrepidly ventures into India's icy "Grand Canyon" region to accompany a team bringing electricity to remote rural villages - and gets his feet frozen to the ice for his trouble.

Caught in a Trap