BBC Two
The New Builds Are Coming: Battle in the Countryside
Main content 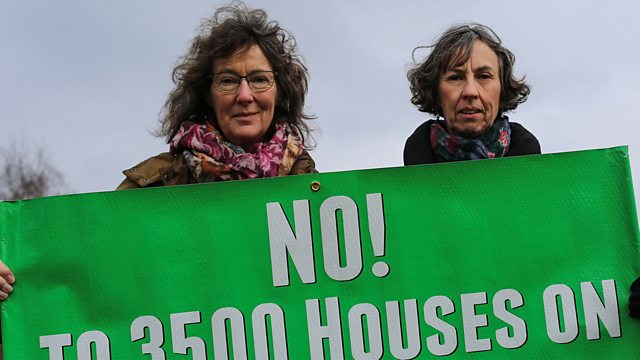 The New Builds Are Coming: Battle in the Countryside Series 1
Episode 1 of 2

Film-maker Richard Macer explores the controversial decision by the government to free up the green belt to developers.

How do you mend the broken housing market? The country needs to build 300,000 homes a year just to keep up with demand. In this series, film-maker Richard Macer heads to one of our most expensive counties, Oxfordshire, where vast areas of once-protected countryside are being turned into housing. With remarkable access to councillors, developers, architects and campaigners, and filmed over nine months, Richard asks if building these vast estates is a solution to the crisis.

In episode one, Macer explores the controversial decision by the government to free up the green belt to developers. In the tiny charming village of Culham, he finds residents furious at plans to supersize their village to three and a half thousand new homes. But just a few weeks after the announcement of the new estate, sinister developments start to grip the small community. Has little Culham become the centre of a gold rush?

In the second film, Macer is on the other side of the fence, with the architects and the developers who are changing the face of rural Britain, with the people trying to create a sense of community from scratch, and the pioneers making these new mini-Utopias their homes. As one architect of a new development next to the village of Long Hanborough puts it: 'No one has a right to a view -unfortunately. Things change, and we have to get used to that in Britain.'.

See all episodes from The New Builds Are Coming: Battle in the Countryside