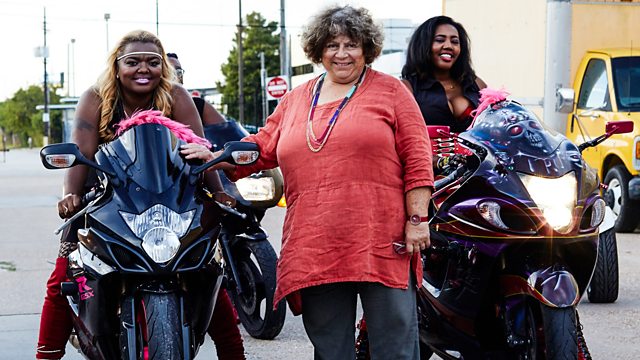 Miriam Margolyes concludes her trip by examining race hate in Arkansas, speaking to an inspirational sheriff in Texas and meeting an all-female biker gang in New Orleans.

This final episode finds Miriam smack in the middle of cowboy country - rural Arkansas - hanging out with Wild West cattle farmers and western goods emporium owners Dan and Peggy Eoff. Seduced by the landscape, Miriam feels the stark divide between city and country folk and sees first-hand why they feel Trump is their man.

But the divisions don't stop there - Arkansas also has one of the highest concentrations of extreme race-hate groups in the US. A short drive from Dan and Peggy's, Miriam arrives in Harrison, once dubbed the most racist town in America. With historical links to the Ku Klux Klan, Miriam meets town residents who are determined to clear Harrison's unfortunate reputation. But despite the majority of people she meets helping to reassure her, a member of a local alt-right group also agrees to meet her. Due to his extreme anti-Semitic views, he refuses to be in the same room as Miriam but will answer her questions via a non-Jewish member of the production team.

Upset and shaken by her encounter, Miriam begins to wonder just how united the United States is. Thankfully hope is on the horizon in neighbouring Texas, where she is buoyed by meeting the inspirational Zena Stephens, the state's first ever African-American female Sheriff, who is breaking down prejudice and hate in the divided city of Beaumont.

Still in Texas, one of the most religious states in the country, Miriam heads to stay with the Flanders, a devout Christian family. Doug and Jennifer have 12 children and believe the only way for the USA and the rest of the world to unite is through Christ. Atheist Miriam disagrees.

After nearly two months and over a thousand miles, Miriam's final destination is New Orleans for a thrilling meeting with the Caramel Curves - the city's all-female biker gang. Throughout her trip Miriam has witnessed a country in flux, but at journey's end she is optimistic that the strength of the people she has met will bring the country back on its feet. Failing that, she concludes, maybe she should be president?!