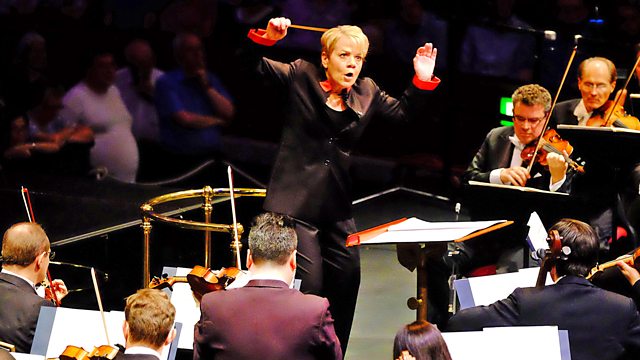 Behind the Scenes Series 2

Conductor Marin Alsop says the future for classical music lies in opening doors and taking the stuffiness out of the concert hall. We follow her at the start of BSO's new season.

Marin Alsop is known to British audiences as the first woman to conduct the Last Night of the Proms. She is an immensely charismatic New Yorker who was taught by Leonard Bernstein and retains his passion for breaking down barriers in music.

Susan Marling follows her in action at the beginning of the Baltimore Symphony Orchestra's new season. Characteristically, Marin chooses to kick this off by taking the orchestra to the Baltimore airport and, not only playing Mozart for passing travellers in the terminal, but allowing them to try their hand at conducting the orchestra.

Marin is that rare combination - a conductor of the very highest order musically and also an excellent communicator with a passion for community engagement. We witness her at work with the BSO and with Orchkids, the music programme she started designed to create social change and nurture promising futures for youth in Baltimore City neighbourhoods. We hear players from Orchkids on stage, rehearsing and playing at the BSO Gala performance with Wynton Marsalis.

We also follow Marin to the Peabody conservatory in Baltimore - the oldest in the USA - where she is training the new generation of conductors. She meets up with some of the successful young conductors she has mentored. Yet we hear that the road hasn't always been smooth - conducting is still a male dominated profession and, for all her efforts, her humour and her skill on the podium, Marin Alsop remains very much one of a kind.