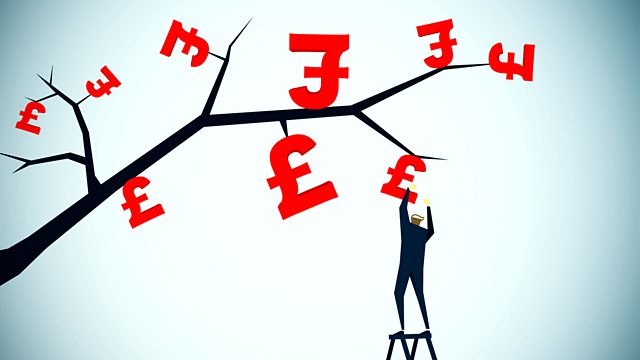 Michael Robinson takes a critical look at Britain's policy of 'quantitative easing' and finds out how £435 billion has been created from nowhere - and where all the money has gone.

During last year's general election, Theresa May argued there was "No magic money tree" to pay for the things some voters wanted. Although she was chided for being unsympathetic to various worthy spending claims, a more fundamental criticism could have been levelled at the Prime Minister: There is indeed a Magic Money Tree!! Since the financial crisis, no less than £435billion of new money has been created through the policy of "quantitative easing", equivalent to a fifth of Britain's annual GDP. In this programme, financial journalist Michael Robinson finds out what happened to this staggering sum of money, and evaluates its effect on the lives of us all.

With the help of expert testimony, Robinson explains how this controversial policy works, effectively creating money at the push of a button. But as he also finds out, the new funds are only indirectly injected into the wider economy, typically through big institutional investors lending to companies. Few of these transactions, it turns out, have involved the kind of 'real world' investment that might be expected to stimulate the productive economy and generate growth. Indeed, almost all of them have been within the financial sector itself, and many people argue that the returns on QE have been astonishingly small.

Moreover, the influx of cash has inflated the price of assets, and led to a relative widening of the gap between rich and poor, which now threatens to upset our economic and political order. Even QE's deliberate objective to lower interest rates has also served to make homes and shares more expensive, while those already holding such assets have seen the greatest benefit. Britain's own 'Magic Money Tree' might have saved the economy from meltdown almost a decade ago, but it seems its many side-effects might have been far less beneficial.