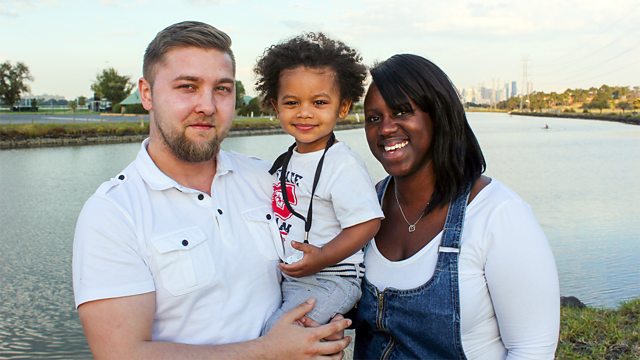 Eastender Edna Siwak has fallen out of love with London and dreams of a better life in Australia for her, husband Daniel and baby Jotham.

Childhood sweethearts Edna and Daniel Siwak met when they were just 12 years old. They married in 2013, had a child of their own and live... exactly where they both grew up, in east London. But now, as a mum herself, Edna is looking at her surroundings through different eyes and doesn't like what she sees. With high-rise living and rising crime rates, she feels the East End isn't the same. She wants better and believes Australia is the answer. But Polish-born husband Daniel is not keen to go. Having lost his mum to cancer a couple of years ago, he feels the loss hugely. Her death has made Daniel and his sisters incredibly close. The thought of leaving them and going to live on the other side of the world breaks his heart.

Edna knows she is asking a lot from Daniel, but as doting parents to Jotham, she believes they owe their little boy the very best upbringing they can give him. However, she is not without concerns of her own. As a mixed-race couple, she needs to know Australia would accept and welcome them. A trial week in Melbourne gives the family a taste of what life could be like down under, but will it be enough? Edna is only too well aware it is going to be a struggle to convince Daniel that the other end of the earth is where their future lies.

The Siwak family are currently living in Melbourne, Australia.

Since their trial week they found out that Edna was pregnant with their second child. Neriah  was born in Australia in October.

Jotham loves being a big brother and Edna is really enjoying staying at home with the kids. Daniel has found good work with a local agency that has a salary to match.

The family are really excited they took the leap, and say- “Melbourne is better than we could've ever imagined!"