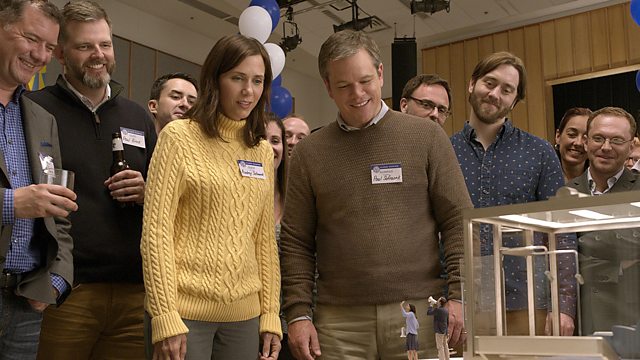 Downsizing, filming sex scenes and a satire on ceramics

A choreographer for sex scenes on stage or on screen is just as important as that for a fight scene - so says movement director Ita O'Brien, who is calling on the industry to do more to protect performers in scenes involving sex or nudity. Ita O'Brien and casting agent Chris Carey discuss her proposals in the post-Weinstein, #MeToo era.

Political cartoonist Martin Rowson joins John at the British Museum to meet Patricia Ferguson, curator of a display called Pots with Attitude: British Satire on Ceramics, 1760-1830 which looks at the Georgian fashion for printing satirical drawings onto pottery .

And on the day the BFI re-issues of the classic British nuclear disaster film When the Wind Blows, based on the cartoon by Raymond Briggs, Ian Christie considers the film's relevance now.

Downsizing is on general release from 24 Jan, cert 15