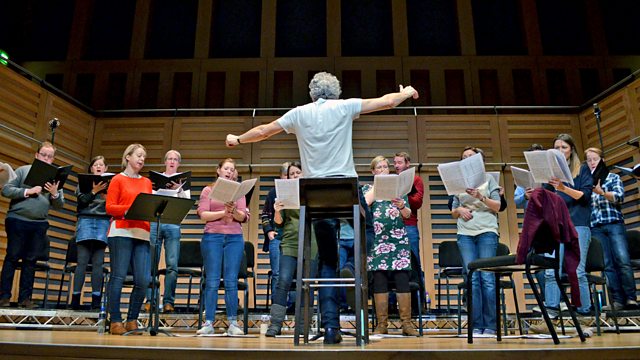 The Sixteen at Kings Place

The Sixteen recorded at Kings Place in a concert that links Monteverdi's music to the polyphonic tradition which influenced him and interleaves it with the poetry of Seamus Heaney.

Monteverdi's music is linked to the earlier polyphonic tradition that so influenced him, and is interleaved with the Dante-inspired poetry of Seamus Heaney.
The Sixteen, recorded at Kings Place, London on 13 January 2018

Monteverdi derived his striking Missa In illo tempore (Mass 'At that time') from a motet by Flemish maestro Nicolas Gombert, written a century earlier. Sensuous settings of the Song of Songs by the great Iberian composers Guerrero and Victoria will be woven through the Mass.

In his 1984 collection 'Station Island', Irish poet Seamus Heaney questioned his place in a nation riven by the Troubles. It includes the poem 'In illo tempore', which considers the grammar and politics of a Mass service. Heaney takes us on a Dantean voyage, encountering ghosts from his past, just as Monteverdi recalled and transformed the ideas of his forebears.

Simon Rattle and the LSO in Berg, Janacek and Bartok

See all recipes from The Sixteen at Kings Place