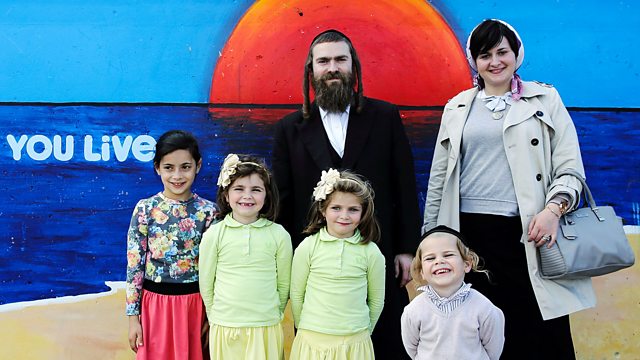 Documentary following Naftali and Miriam Noe and their four children from Stamford Hill as they join the 25 Hasidic families who have already made the move to Canvey Island.

Europe's largest ultra-Orthodox Jewish community has lived in Stamford Hill, London, since the late 1800s. But with rents soaring, they are on the move. This film follows the Hasidic community as some of them embark on their biggest exodus since World War II. They have chosen the most unexpected place, Canvey Island, on the River Thames estuary, one of the five most pro-Brexit wards in Britain.

In 2013 the island was voted the most English place in Britain. The ultra-Orthodox Hasid spend most of their time in prayer or studying the 613 commandments of their holy book, the Torah. Renowned as a tight-knit and insular community, for the first time in decades they are looking to put down roots in the new 'promised Island'. Both the Hasid and the Canvey Islanders are aware of the challenges of integration, let alone finding reliable deliveries of ultra kosher food.

With unique access to this tightly closed community, we follow Naftali and Miriam Noe and their four children from Stamford Hill as they join the 25 Hasidic families who have already made the move to Canvey.

Chris Fenwick, a lifelong Canvey Islander, pub landlord and manager of the rock and roll band Dr Feelgood, has devised a plan to integrate everyone. He is inviting his new neighbours to a gig in his pub, taking the Hasidic children on a guided tour of the Island, and with the help of Reverend David Tudor and the next mayor of Canvey, Barry Campagna, hoping to bring both sides together during a meal at his pub. The film follows the guests, the arrangements and the challenges of organising a dinner party for the two very different communities. Mutual understanding is top of the menu but will the Hasidic guests turn up? And will the predominantly Christian islanders learn to love their new neighbours?