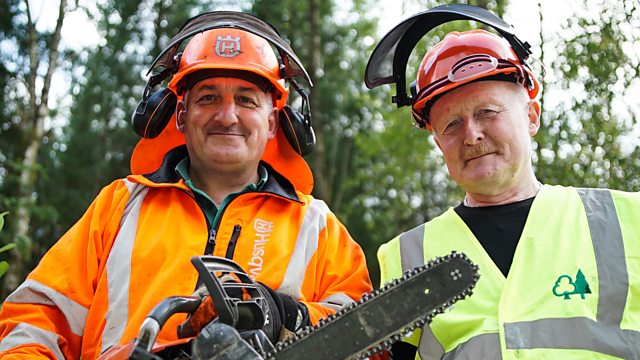 Mark Bonnar narrates a series revealing the world of Galloway Forest. The Forestry Commission's recreation team must rebuild steps on a well-worn pathway at Fairy Knowe.

Mark Bonnar narrates the first in a series revealing the hidden world of Galloway Forest, the country's largest afforested area. Join the amazing men and women who live and work in the place known as Scotland's 'Highlands in the Lowlands', where 600,000 tonnes of timber is produced every year.

The Forestry Commission's recreation team, lead by Archie McNeillie, is tasked with rebuilding steps on a well-worn pathway at Fairy Knowe. The trouble is, the steps are up a 330-foot hill. Getting hunks of granite rock to the remote location is one problem and digging them in by hand is another - for labourer John 'Cool' Coughtrie at least.

A team of specialist contractors from Wales arrive in Galloway Forest to harvest timber from the most inaccessible areas using a massive system of cables and winches called the skyline. Conservationists Bill and Christine have a very unusual occupation deep in the forest. They breed and hand-rear hyacinth macaws, the world's largest flying parrot.

And on a remote peatbog the size of 32 football pitches, Graeme Little operates his own customised mulching machine in a conservation project to restore the natural habitat.

See all episodes from The Forest