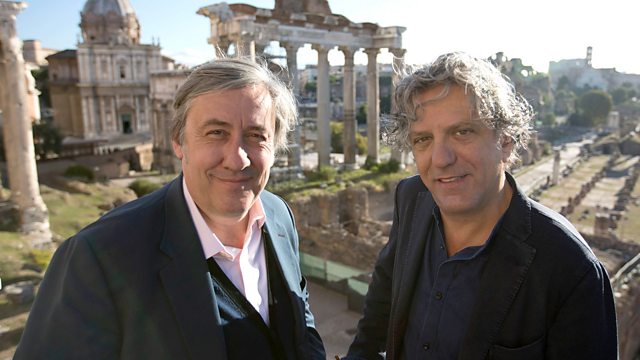 Giorgio Locatelli and Andrew Graham-Dixon explore Italy's iconic capital, discovering the generations of ordinary Romans who left their mark on the city's culture and gastronomy.

To really understand Rome, you must understand its people - or the mob, as they were known in ancient times. As Giorgio Locatelli and Andrew Graham-Dixon explore Italy's iconic capital, they are in search of the generations of ordinary Romans who have left their mark on the city's culture and gastronomy.

Giorgio insists that they travel, in true Roman style, by moped. They start their journey at the Trevi fountain, immortalised in Fellini's La Dolce Vita - which itself featured countless locals as extras to capture the real faces of Rome. Giorgio leads Andrew to some of his personal favourite districts, including Garbatella, Italy's first garden suburb, with its vibrant market stalls and village architecture, and introduces him to the simplest Roman food - 'the true food of the people'. He also insists on showing him how spaghetti carbonara should really be made - 'add cream and I'll kill you'.

See all episodes from Rome Unpacked